Women on the faculty and administration Part 2: Jill Harsin

Jill Harsin, Thomas A. Bartlett Chair, professor of history, and former interim president (2015–16), reminisces about her early experiences as a professor at Colgate and the lessons she learned from the women — both faculty and students — who came before her. This essay is an adaptation of her portion of the “Enter Women” Bicentennial celebration seminar, which she presented with Jane Pinchin (Thomas A Bartlett Professor of English, emerita; interim president 2001–2002) and Tracey Hucks ’87, MA’90 (current provost and dean of the faculty). 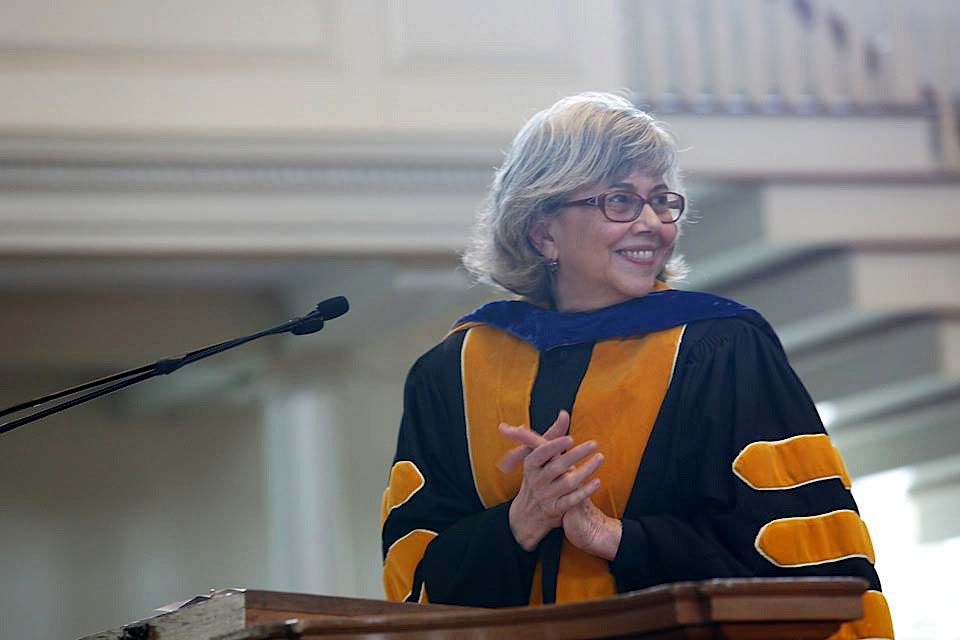 I missed the “Year of the Woman” in 1974 (see the essay by Jane Pinchin). I came in 1982 as a part of the second generation, when the women of the first were just being tenured. When I received the invitation for an on-campus interview, I immediately went to the library at the University of Iowa, my graduate school, to look up Colgate’s history department (there was no Internet then). My heart sank.

The history department here already had a senior woman, Carol Bleser, and, even worse — one untenured woman, Nancy Bernkopf Tucker. She was the more unsettling, in my eyes, because while Bleser seemed an anomaly, a distinguished senior historian who, unaccountably, was here, Tucker’s presence meant that this department already had “a woman”; they would not need me. (That’s the kind of calculation that was common in my cohort of women historians coming just after the first wave of women who (we thought) were getting all the jobs. Happily, I was wrong.

Nancy, who later left for Georgetown, was a wonderfully supportive colleague who helped me learn the ropes in my department, although she was only two years ahead of me. And that was the story of my life here, for the first few years — very supportive colleagues, both women and men, but with women colleagues there was always that added layer of understanding.

One of the greatest difficulties in my early years here was finding my professorial voice. I had had only two women professors in history, one as an undergraduate and one in graduate school. Even though we were great believers at the time in “difference-blind” feminism — that is, that women are just as good, can do things just as well, are just the same, as men — my own experiences in the classroom did not quite bear that out. There were expectations of women in the classroom that were different from what men were expected or allowed to do. There were things I wanted to do, ways I wanted to be, that were largely different from what I had learned from my mostly male role models. 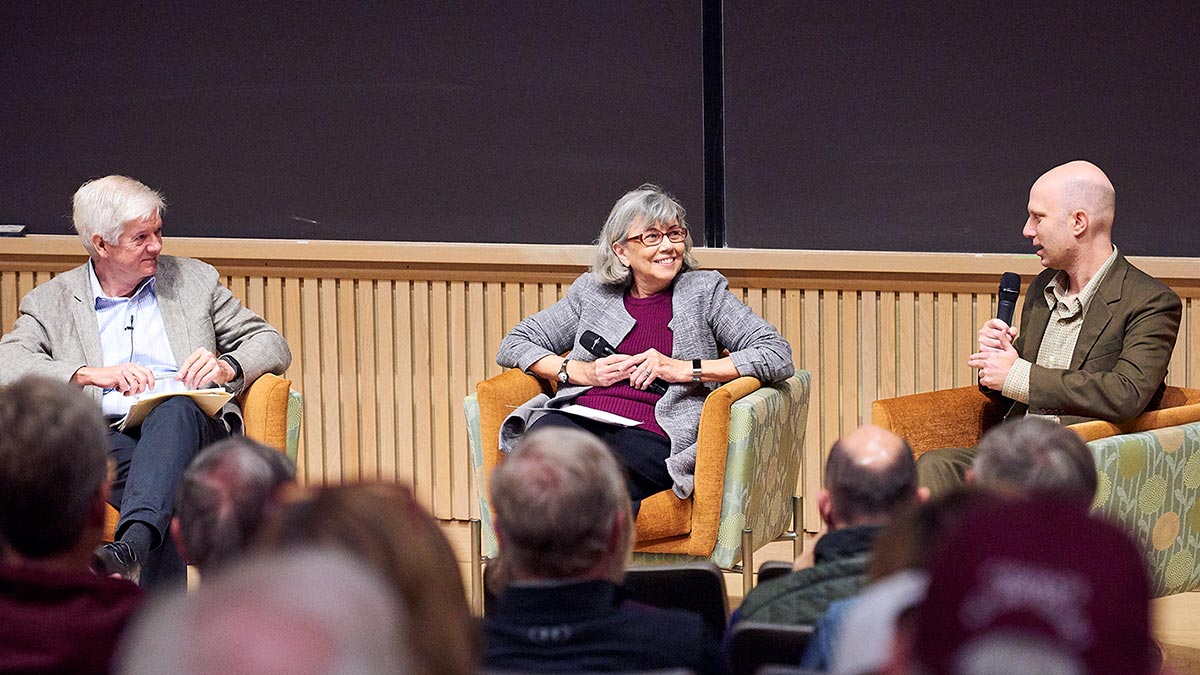 Harsin served as co-chair of the Bicentennial Committee, leading research on the history of the institution.

My first year, I taught a women’s history course, but also tried to integrate women’s lives into all my courses, not very well, at first. In my other courses I could literally see students put down their pens and pencils when I started to talk about women — an experience, I learned, that was not unique to me.

In my Fall 2018 first-year seminar, Women’s Lives in Europe, we began the course by looking at the second wave of the women’s movement, the 1960s and ’70s, where we had what I’ve called the invention of women’s history. We started looking back at what people knew at that time. And in looking back at the research of the ’60s and ’70s, I’ve been amazed at how little research there was on gender and women. We knew nothing. There were a few anecdotes. A few famous women. A few odds and ends from demography.

So, my most important teaching experience here was team-teaching Women in the Anglo-American Tradition, the first women’s studies course at Colgate, with Jane Pinchin in English, Marilyn Thie in philosophy and religion, and JoAnne Pagano of educational studies. I did not start it, but I was brought into it. Watching them all teach and interact with students was a learning experience for me. Most important for me was Jane, both for her kindness and for her expertise. I got a crash course in teaching from her. I also got many lessons in patience, kindness, putting myself in the position of someone else before I blurt something out. All of which I continue to draw on.

So, what are the lessons?

First, I was acutely aware of all the women faculty at Colgate during that first year, in lonely outposts in various departments: Marietta Cheng in music; Marilyn Thie, in philosophy and religion; Margaret Maurer, Lynn Staley, Deborah Knuth Klenck, and, of course, and Jane Pinchin in the English department; and a few others. I was aware of them all, and my own experience makes clear to me the need for what has been described as a “critical mass” — whether of women, of students or faculty of color — as a way of ensuring success.

Second, as we celebrate Colgate’s 200th year, we can, today, celebrate the presence of women at this school; however, as Wanda Warren Berry (philosophy and religion, emerita) recently pointed out, the story of women for most of Colgate’s history is a story of absence.

Emily Taylor, the daughter of President Stephen Taylor, sat in on classes; the impressive Mabel Dart Colegrove finished seven semesters here and then had to transfer and graduate from Vassar; there was a female seminary in the Village of Hamilton; and a few GI wives were allowed to take courses after World War II. There were many unsung heroes, women who worked on the staff in various positions and helped to keep Colgate running. And that was it, for women’s on-campus presence, for the first 150 years. 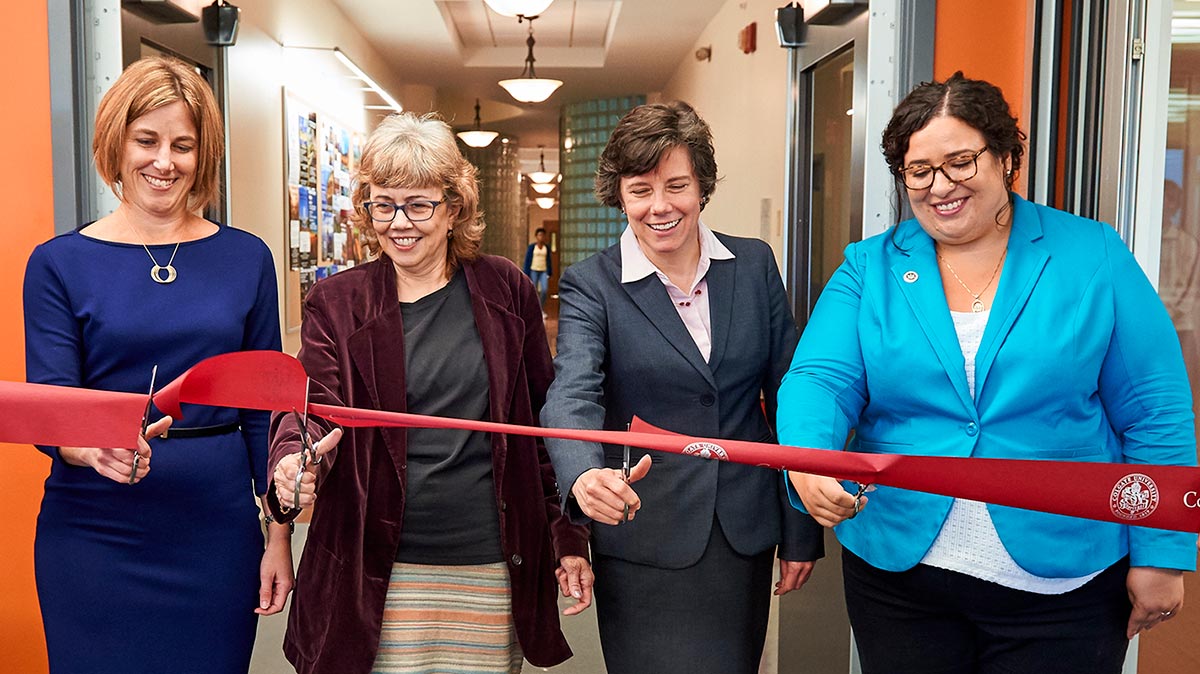 Harsin served as interim president between the administrations of Jeffrey Herbst and Brian W. Casey.

When women finally came in numbers to Colgate, as faculty and as students, there was a steep learning curve. The student newspapers from the 1982–83 academic year, the year I first taught here, charted that slow progress. In that year, women’s studies was a very new program, with only a few courses, and there was a call, in the Colgate Maroon, to establish black and Latin American studies. Now we have the very successful Women’s Studies Program and Africana and Latin American Studies Program.

The Colgate News published an anonymous article titled “letter from a gay student,” who spoke of the stress of concealment of his sexual preference. Now, of course, there is an LGBTQ community and minor.

Title IX was primarily thought of in those days as relating to sports, and there were reports over the years of determined women students, ice hockey players, who waged a seven-year-long court battle against Colgate to turn women’s hockey from a club sport to a varsity sport. They did not give up, and they won. I thought of that last year, as I watched them in the semifinals in the Class of 1965 Arena.

In looking at women’s history generally, I used to feel sorry for the first generation of suffragists and first wave of feminists. Because they worked so hard for so long. So many bake sales. So many petitions. So many marches and parades, for so many decades, to get the vote. But the struggle to get the vote seems at least relatively simple compared to the challenges that exist now. We are in an odd place, both as a country and as members of a college community, whether students, alumni, faculty, or staff, in terms of what seem like more fundamental human issues. Issues that involve the way people treat each other.

I remember attending a talk by Marilyn Thie in the religion department more than 30 years ago, where she talked about the “mean time” and how you survive it. It seemed to define us then as it does now. As an historian, I think about periods in history. I am reminded of the Enlightenment in the 18th century before the age of democratic revolutions, the mean time being those moments, like the Enlightenment, between one thing and another. A period when ideas about the way things should be, or what can be tolerated, are unsettled and when we’re not yet at the point of change to the way we want them to be.

Marilyn Thie spoke about getting through the mean time in creative ways, and I think that’s where we are now, trying to figure out how to do that.

I have loved being at Colgate, in spite of any criticisms I have made and fully intend to make in the future; it’s been a home to me, in the truest sense of the word, for many years, and most important has been the community of my fellow Colgate faculty, staff, and administration, my students both past and present. For those who will graduate in the future, and for those who are connected in other ways, I hope it is always a home for them as well.

—Extensively involved in university governance since joining Colgate in 1982, Jill Harsin has served in several leadership positions, including department chair, social sciences division director, interim provost and dean of the faculty, and interim president in 2015–16. 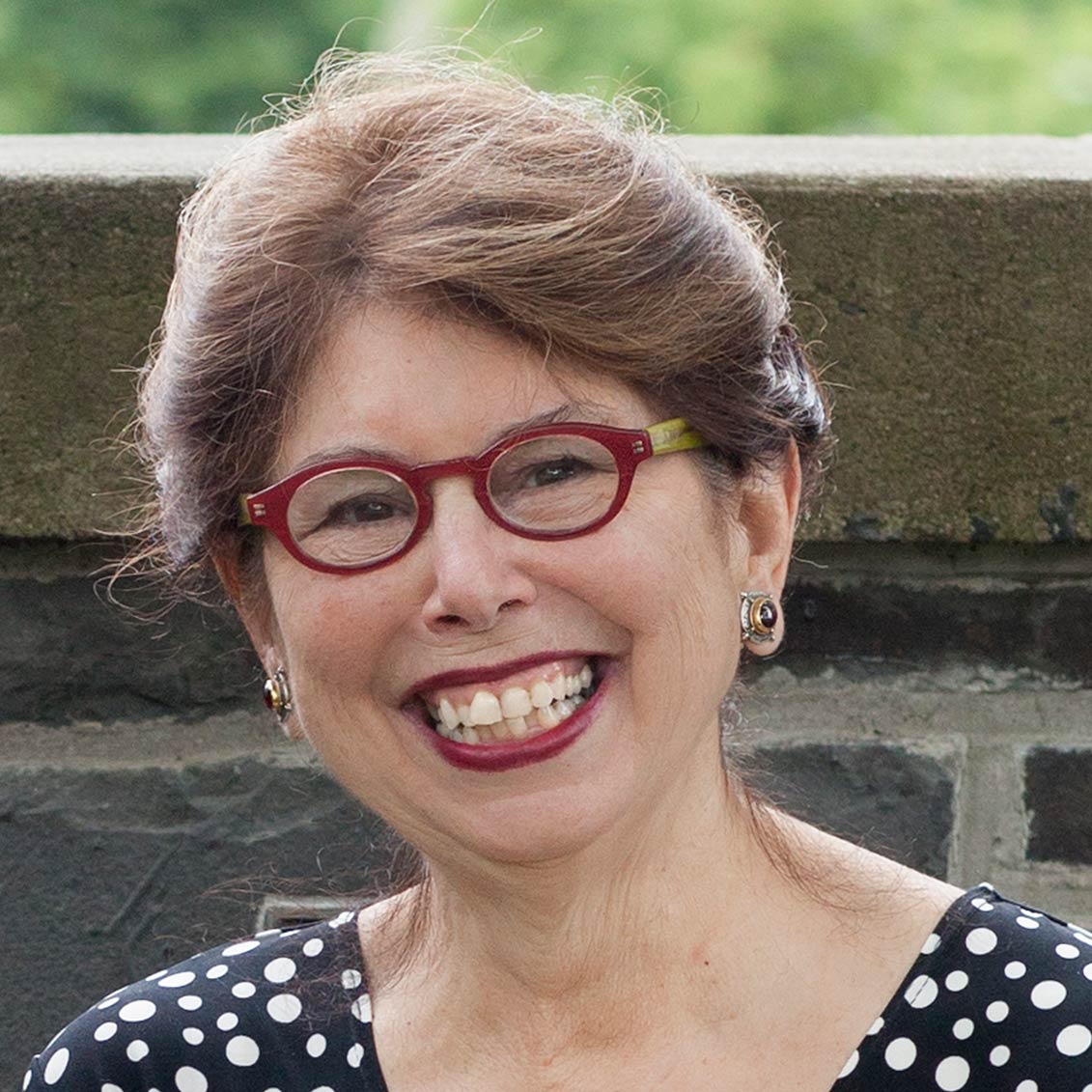 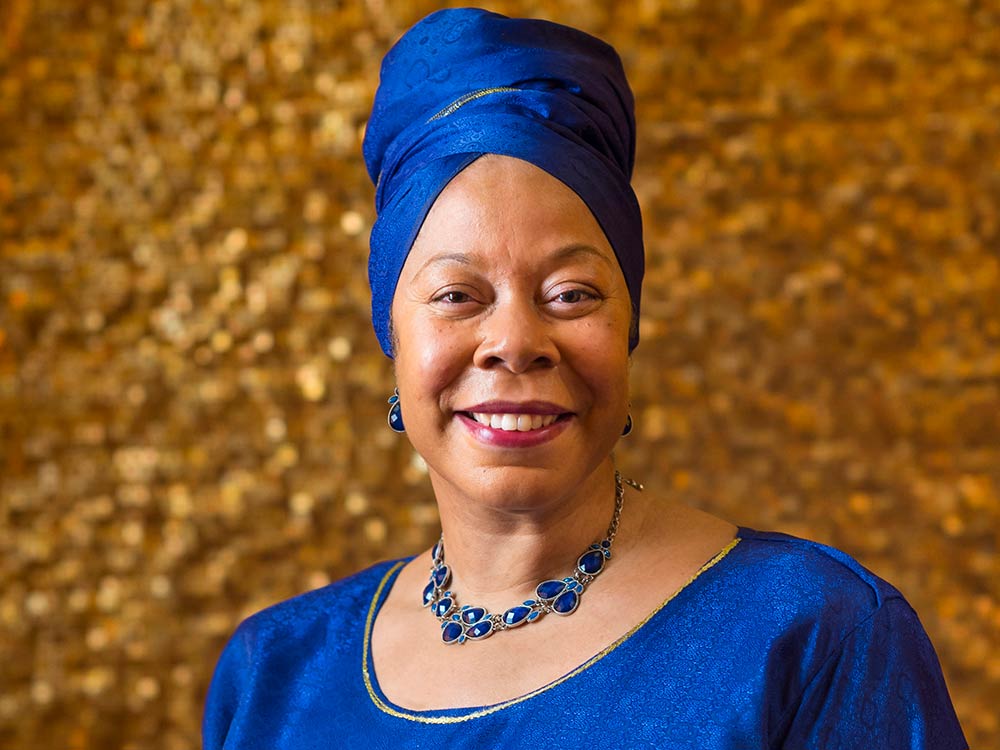 Reminiscing about her intellectual awakening inspired by women professors at Colgate