Although the season was marred by a Rose Bowl snub, the 1932 football team turned in an all-time great season behind legendary coach Andy Kerr. This is the story of the only Colgate squad to go "undefeated, untied, unscored-upon—and uninvited.” 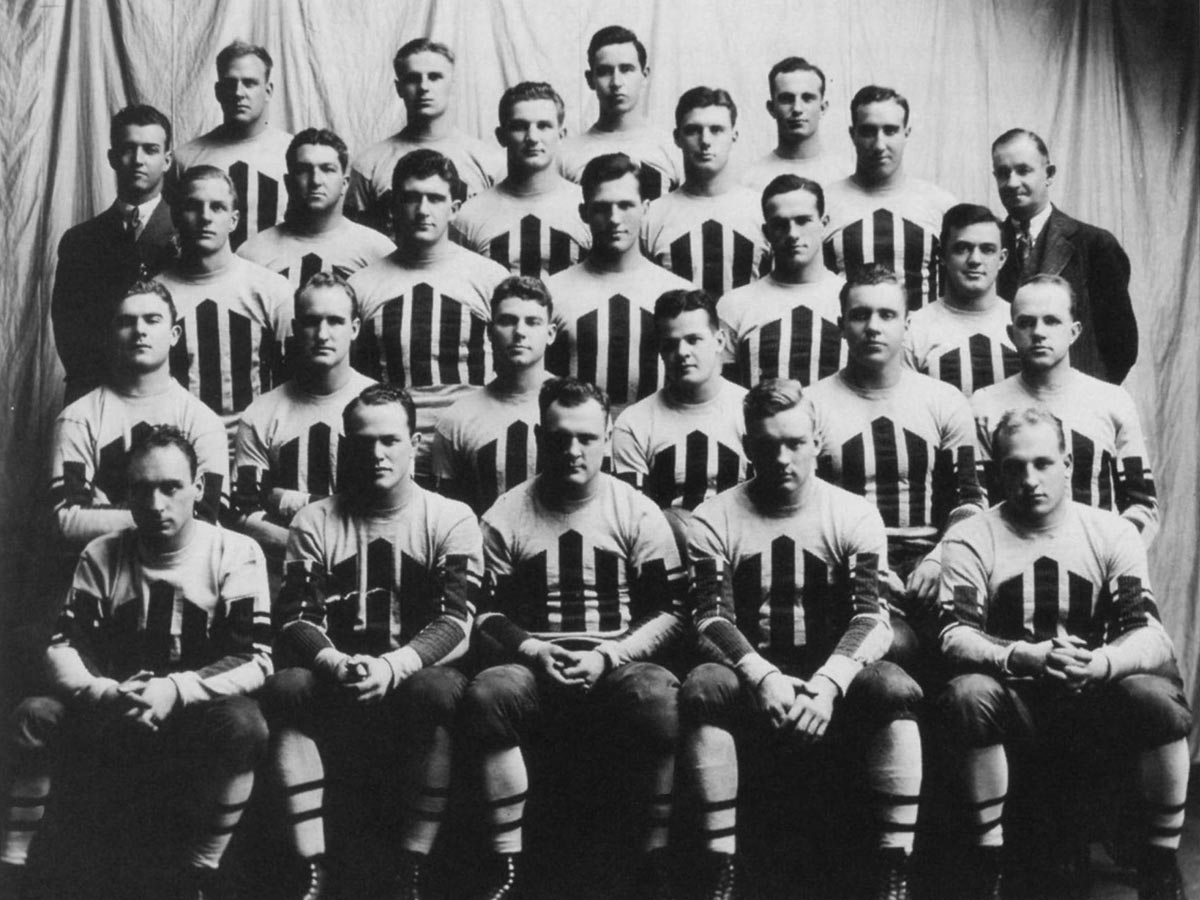 In 1932, Colgate’s football team played an amazing undefeated season. It was one that will never be forgotten.

Elementary in the education of Colgate athletic fans is the legend of the football squad of 1932, which was famously “undefeated, untied, unscored on and uninvited” [to the Rose Bowl]1

The team was a reflection of its coach, Andy Kerr, himself a legendary presence whose disciplined approach and complex offenses earned him the nickname “the Canny Scot.”2 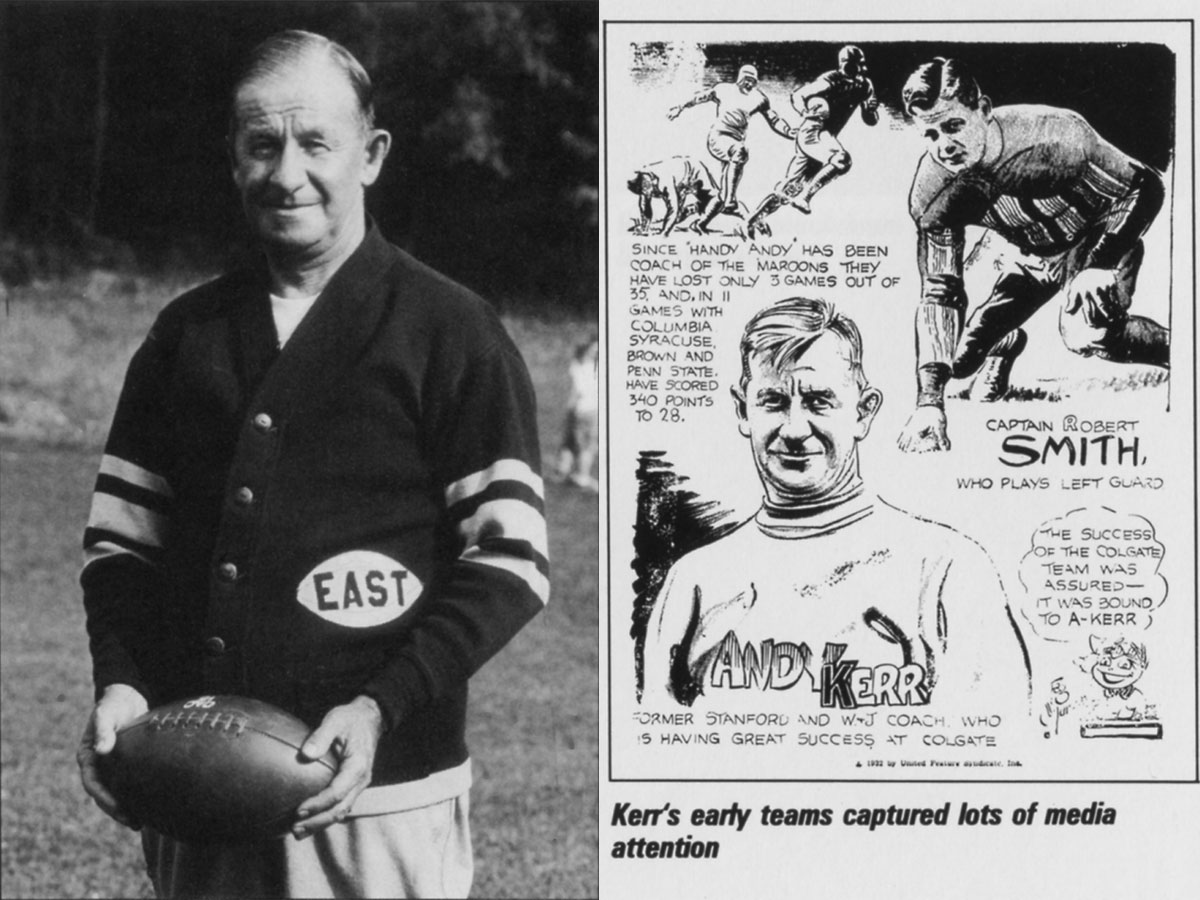 “The most breaks come from brainy football.” — Andy Kerr

A disciple of Glenn “Pop” Warner, head coach at Pitt and later Stanford, Kerr learned Warner’s double-wing offense while working as his assistant at Pitt. Kerr went on to coach at Stanford and then at Washington & Jefferson before joining Colgate in 1929.3

Except for a year off (1918) during World War I, Colgate had been playing football since 1890, with reasonable success, when Kerr arrived. He was to take that success to a different level during his 18 years as head coach, and especially during his first eight seasons when his teams amassed a record of 60-11-1, never losing more than one game in a season until 1935.

Collegiate football was more equitable in those days, before television contracts and the infusion of huge amounts of capital skewed the competitive balance, and a well-coached team from a small place like Colgate could hold its own against future powers such as Michigan State, Wisconsin, Penn State, Syracuse, and Pitt, while also competing against more like-sized rivals such as Hamilton, St. Lawrence, Hobart, and the teams that would join together in 1954 to form the Ivy League.

Colgate’s schedule in Kerr’s first season (1929) included Wisconsin, Michigan State (played in Hamilton), Indiana, and Syracuse as well as Columbia, Brown, St. Lawrence, Providence, and Hampden-Sydney. The team outscored its opponents 315-19, and lost only to Wisconsin (13-6).

The 1930 team was 9-1, losing only to Michigan State (14-7). Colgate beat NYU 7-6 that year in a benefit game played at Yankee Stadium. Fullback Len Macaluso ’31 was named All-America at the end of that season.

Colgate went 8-1 in 1931, losing only to NYU (13-0, again at Yankee Stadium). End Johnny Orsi ’32 was named All-America that year. Andy Kerr had established his bona fides, and the national football press had taken note of his teams.

Colgate sported new uniforms for the 1932 season — maroon pants, white jerseys trimmed in maroon, and white helmets — and sports publicist Dex Teed nicknamed them “The Red Raiders.” Kerr said he expected a good team, but withheld predictions beyond that.4

The team had put 108 points on the board and given up none coming into its fourth game of the season, against Lafayette. To his ball-movement offense of laterals, passes, reverses, and other deceptions, Kerr had added a double-spinner series that he unveiled at Easton to register the season’s fourth win, 35-0.

NYU was up next, and the legendary New York Times sportswriter Allison Danzig previewed the contest in his October 18 column, “On College Gridirons”:

The Red Raiders of the Chenango are coming to town. From the sylvan fastness of peaceful Hamilton, NY, they will descend upon Gotham in their red jerseys and red moleskins to engage New York University’s powerful eleven in what shapes up as the big game of the local season thus far.

…This Fall there is no outstanding player on the squad such as were Orsi last year and Macaluso in 1930, and the team is a little lighter than usual, but it is a full-rounded and well-balanced outfit, ably manned at every position and well bolstered in reserves, especially in the backfield.

Thirty-five thousand fans turned out for the game at Yankee Stadium and witnessed the Raiders’ 14-0 dismantling of NYU, including five interceptions by Kerr’s defense to match the razzle dazzle of his offense. The team then beat Penn State (31-0) and Mississippi A&M (32-0) at home, before turning its attention toward Syracuse.

Andy Kerr was both a positive influence on his players and a force for good in the community. He was the first president of the board of directors of Hamilton’s Community Memorial Hospital. 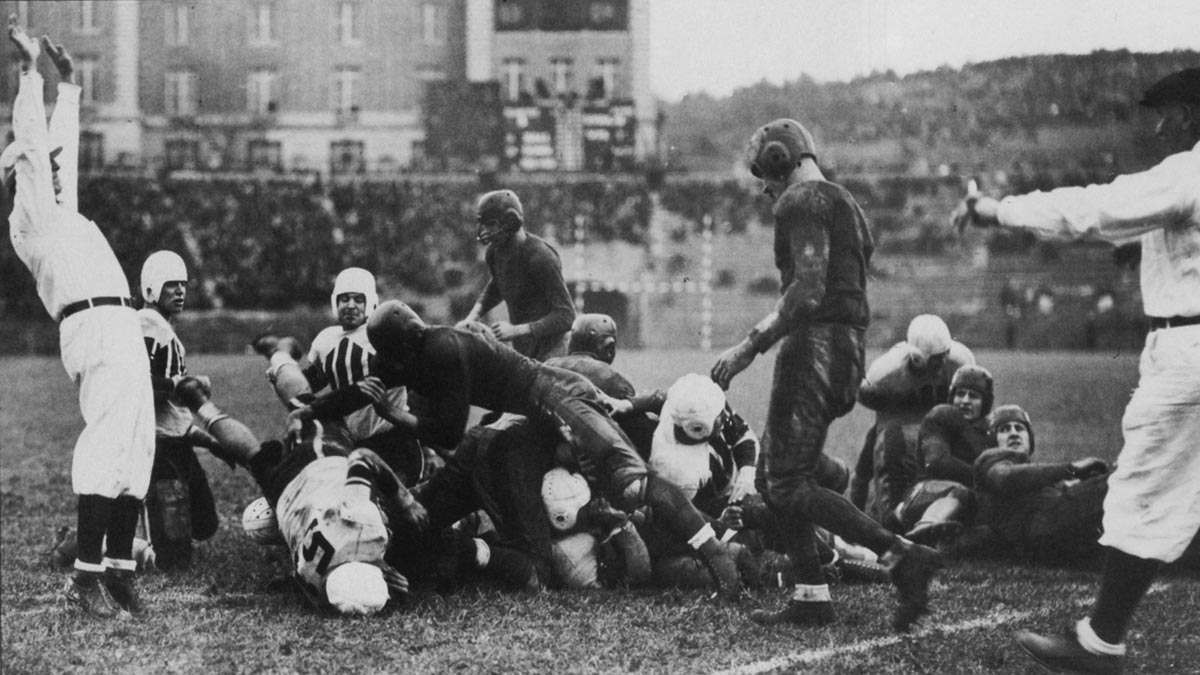 Bob Rowe '33 plunges in for a touchdown vs. Syracuse

Under the headline “30,000 to See Colgate’s Unbeaten Eleven Play Syracuse in the 35th Game of Their Series,” the New York Times led with an Associated Press account that began, "Colgate’s Red Raiders, unbeaten and unscored upon, were overwhelmingly favored tonight to defeat Syracuse in their thirty-fifth meeting in Archbold Stadium tomorrow. The only betting was on points, with Colgate supporters freely offering 20 points."5

History shows that Colgate didn’t beat that point spread, winning 16-0, but the victory sent the team to Aldrich Field in Providence, R.I., undefeated and unscored upon, to face its final regular-season opponent: Brown, also undefeated, on Thanksgiving Day.

Speculation was rife that the winner of the Colgate/Brown match-up would be invited to Pasadena to compete in the Rose Bowl on New Year’s Day 1933. The New York Times of November 19 in fact quoted Colgate President George Barton Cutten under the headline “Colgate Asked to Consider Playing in the Rose Bowl.” The Associated Press account said Cutten, in Memphis to deliver an address, “…told newspaper men Colgate had been requested to say whether it would accept an invitation should it triumph over Brown. ‘We will wait until after the meeting with Brown on Thanksgiving Day,’ he said. ‘Then we will be able to make a decision.’”

Colgate’s Red Raiders, unbeaten and unscored upon, were overwhelmingly favored tonight to defeat Syracuse in their thirty-fifth meeting in Archbold Stadium tomorrow. The only betting was on points, with Colgate supporters freely offering 20 points.”

Colgate’s defense carried the day in the match-up of unbeatens, holding Brown scoreless, and the offense put up 21 points to finish the regular season with a total of 264 to opponents’ nil. In his account of Colgate’s ’32 season, Ray Schmidt quotes the Times’ Robert Kelley: “…there is no longer the slightest doubt about the right of Colgate to call its football team a great one.”6 Kerr’s team was the consensus choice as the mythical “Champion of the East.” 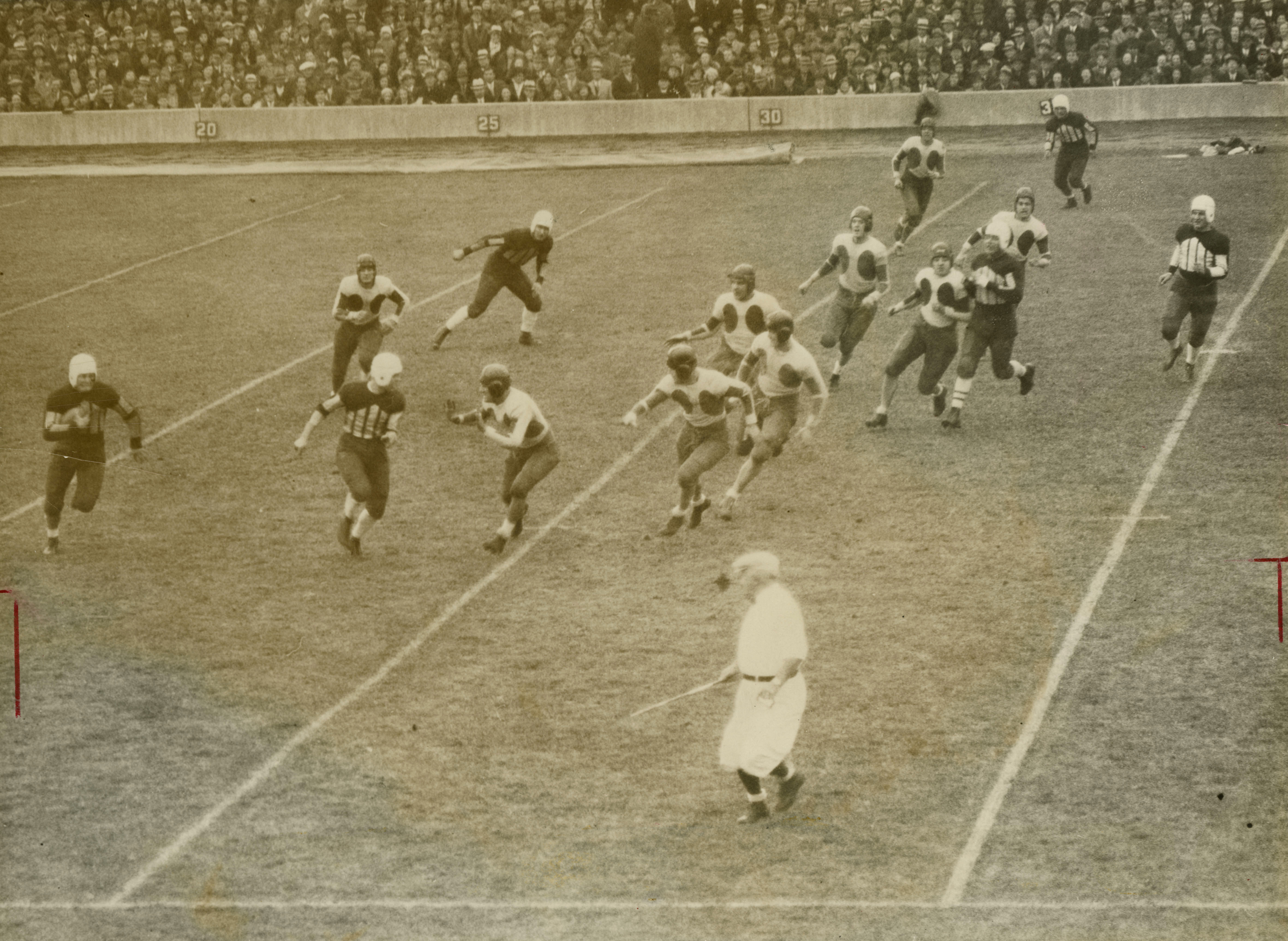 Alas, a trip to the Rose Bowl was not to be. Instead, unbeaten USC invited Pitt’s Panthers — a decision many writers speculated was made on the strength of Pitt’s schedule — and drubbed them 35-0.

Prompted by a letter from Colgate alumnus Nate Tufts ’32, LA Times columnist Jim Murray — a half-century later — implored the Rose Bowl Committee: “Next Time Give the Bid to Colgate.” In that column, Murray reported, “…when the Red Raiders were snubbed, a rueful Andy Kerr was to scribble on the blackboard the immortal identification which would follow his team throughout history, ‘Undefeated, Untied, Unscored-upon—and Uninvited.’ History was ill served.”7 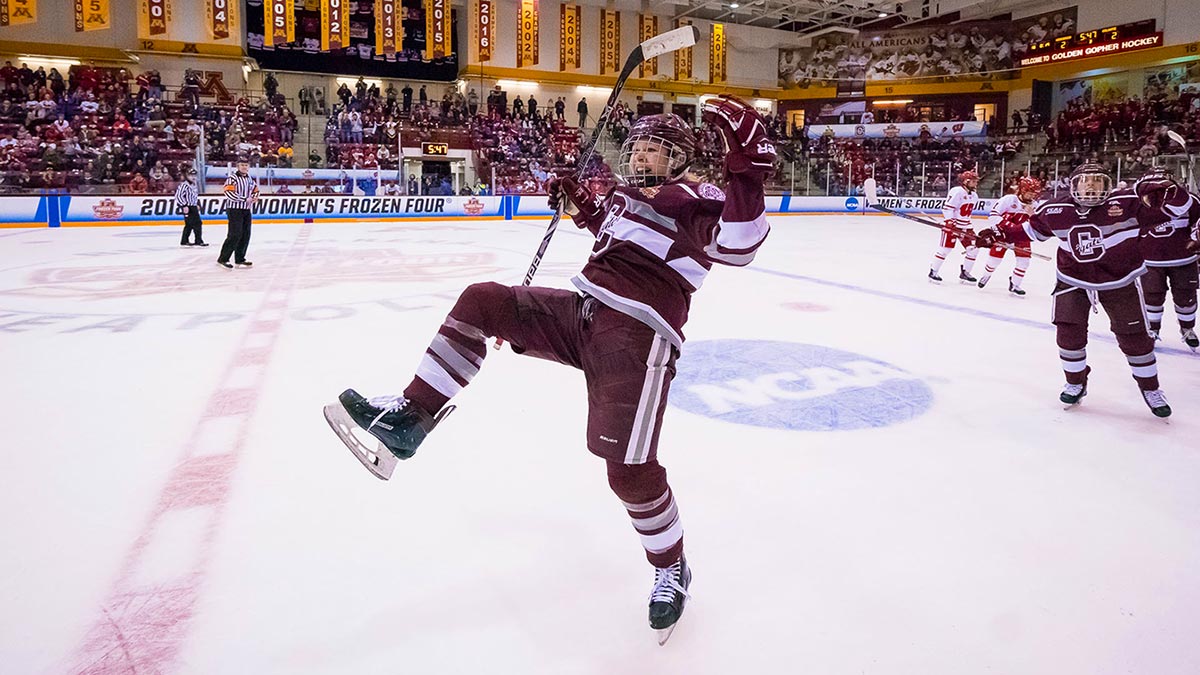