By Emily Jeffres and Natalie Sportelli ’15

Elected to the U.S. House of Representatives, the political and spiritual leader of the early civil rights movement — and complex figure — became the first person to represent Harlem in Washington, D.C. 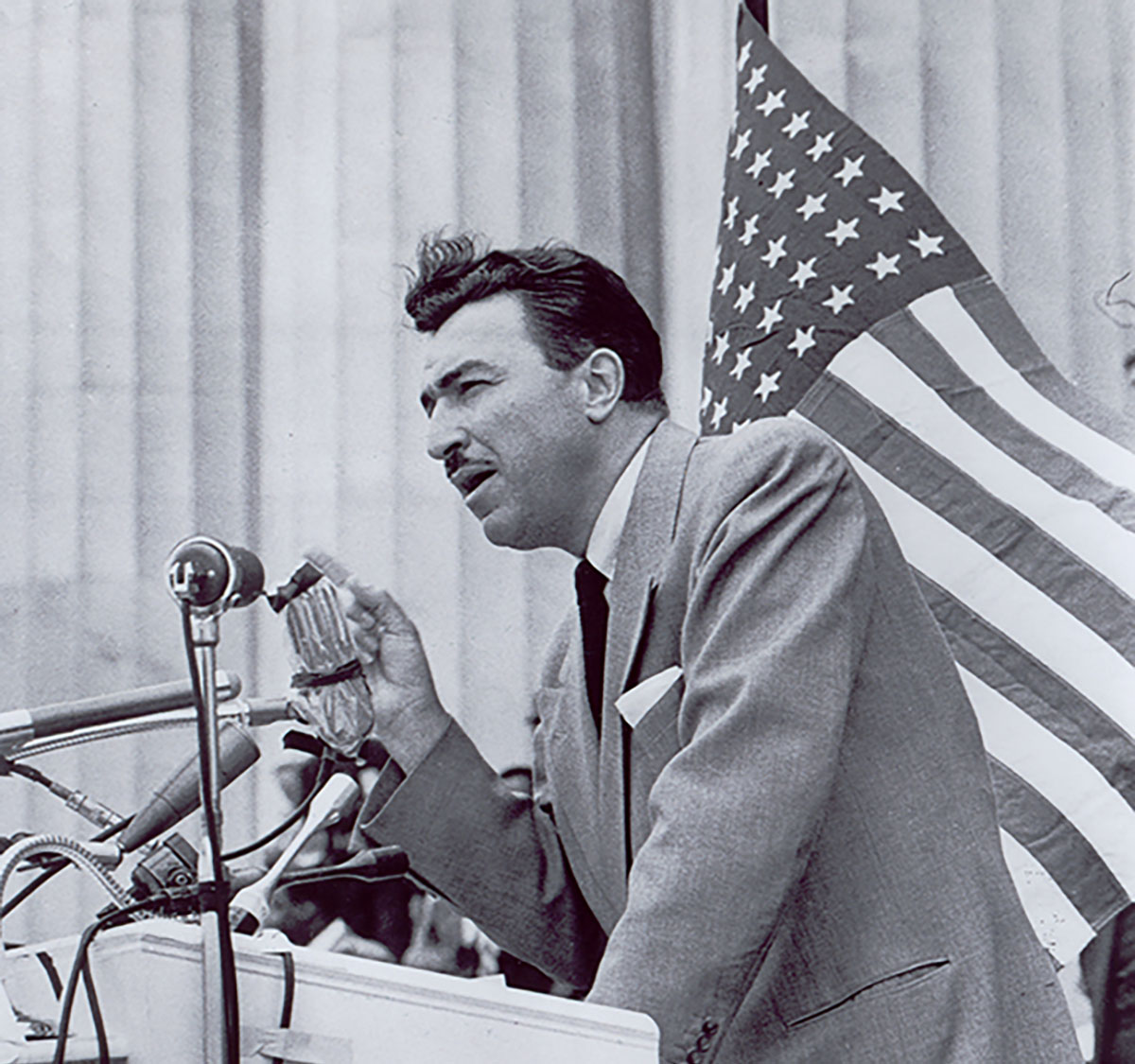 New York Representative Adam Clayton Powell Jr., then one of only three African Americans in the U.S. Congress, gives a speech in support of civil rights legislation, February 2, 1955 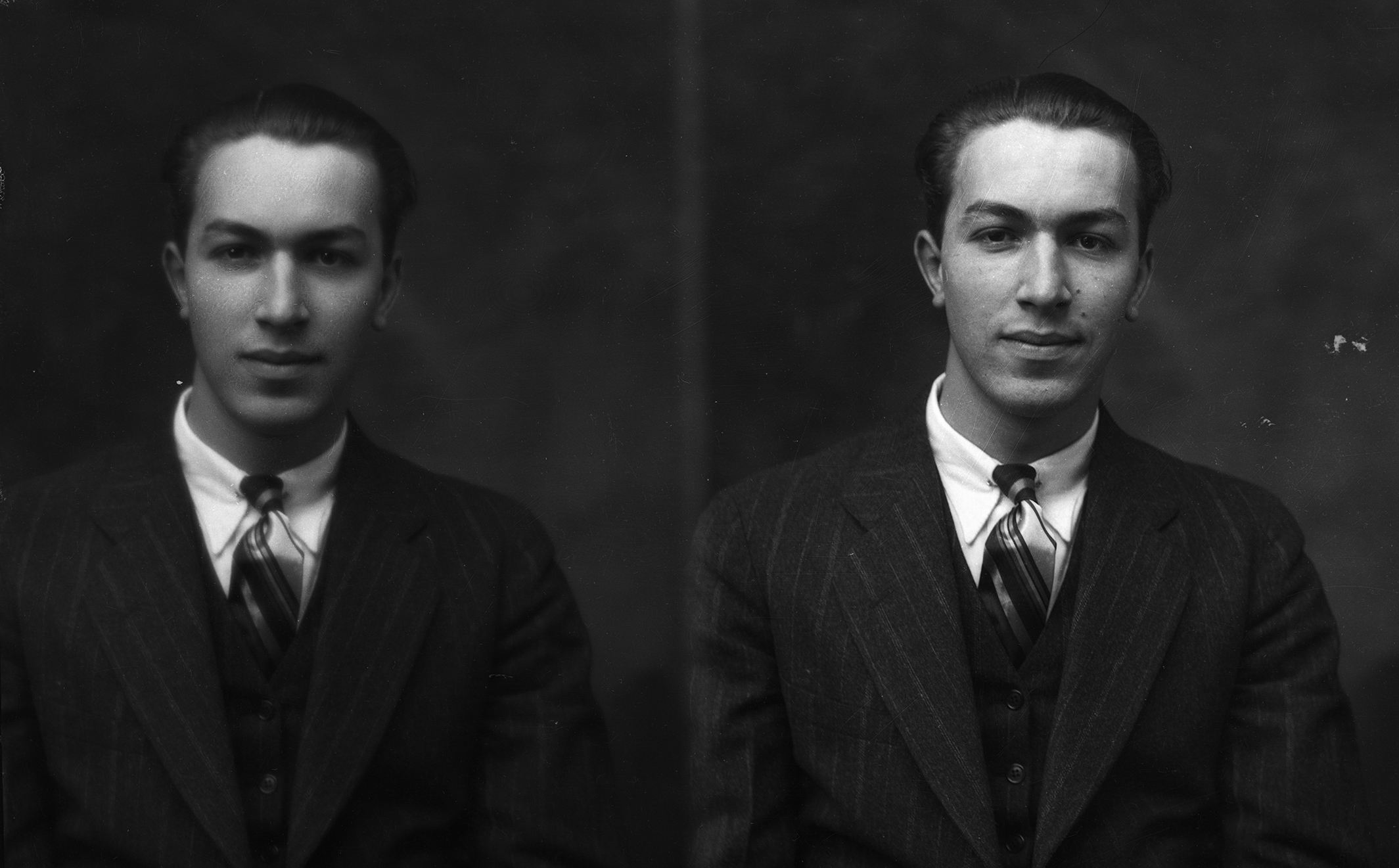 Adam Clayton Powell Jr. as a student at Colgate, circa 1930

Politician, pastor, and civil rights activist Adam Clayton Powell Jr. could command an audience — from the church pulpit to the Congress floor. An effective leader and agent for change, Powell pushed boundaries in order to better the lives of African Americans, contributing to the early history of the civil rights movement.

Before he became a political and spiritual leader, Powell was a student at Colgate, Class of 1930. When the bright but rebellious teenaged Adam was expelled from the City College of New York, near his childhood home in the city, his parents “schemed to send him away to another college, preferably a distant male school, far removed from girls and Harlem’s incessant social life.”1 Colgate University — where his father’s longtime ministerial associate and friend George B. Cutten was president — fit the bill.

When Powell entered the university in 1926, there were only four other African American men in the student body: Merton Anderson, Ray Vaughan, Daniel Crosby, and John Enoch. All of the men except Powell participated in Colgate athletics and came from modest backgrounds.

Unless man is committed to the belief that all of mankind are his brothers, then he labors in vain and hypocritically in the vineyards of equality. 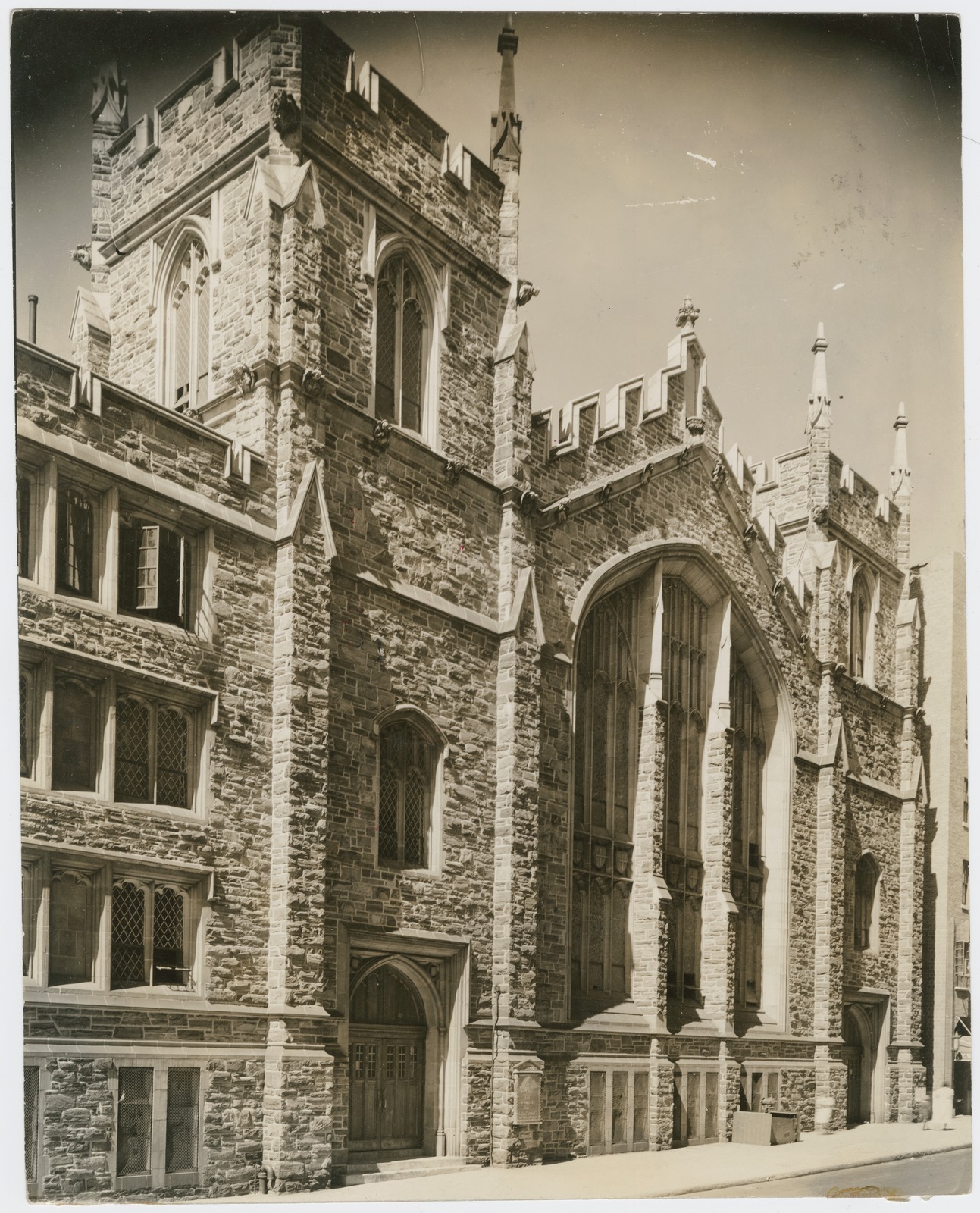 Although sources differ on the details, students assumed that Powell was white when he arrived at Colgate. We do not know if Powell encouraged this or simply did not refute it.2 Powell and his family were light-skinned and members of the black elite in New York City. His high school transcripts, which accompanied his application to Colgate, list his race as “white.”3 Both his father and mother are described as mixed race in vital records.4

However complicated the question of racial identity and its politics, Powell’s father, Adam Clayton Powell Sr., was widely known as a spiritual leader and member of the African American community who led New York City’s historically black Abyssinian Baptist Church to prominence and prosperity in the early part of the 20th century. Notably, he relocated the church from its original spot in a troubled red-light district uptown to Harlem, in 1923 (in the midst of the Harlem Renaissance). There, as the borough experienced rapid population growth, in part due to the Great Migration (of African Americans out of the rural southern United States), the church flourished. Abyssinian’s social justice gospel compelled and supported the African American community in Harlem.5 6

In the spring of Powell Jr.’s freshman year, President Cutten invited Powell Sr. to speak in Memorial Chapel. Powell Sr.’s lecture called for cooperation and understanding between blacks and whites and defended interracial marriage.7 As word of the lecture and the pastor’s heritage spread throughout campus, Powell Jr.’s racial identity became known. His white roommate, whom he had considered a friend, demanded to be moved: “I can’t live with you any more because of the way your father defended Negroes today — you must be a Negro!”8 The reaction caused significant distress to Powell Jr. In his autobiography, Adam by Adam, Powell reflected: “This was the first time in my life that deep discrimination had touched me directly.”9

Interestingly, in contrast to his later reputation, Erik Tuveson, Class of 1992, wrote in his honors thesis on Adam Clayton Powell Jr. that many of his classmates remembered him as a “quiet, unobtrusive individual.”10 This characterization, Tuveson asserts, owes itself to the significant amount of time Powell Jr. and his friends spent off campus, in both Syracuse and New York City. Vaughan, Crosby, and Powell joined Syracuse University’s chapter of Alpha Phi Alpha, the oldest of the nation’s black Greek-letter college organizations, and they visited frequently for social events and general camaraderie. On longer recesses, Powell Jr. often returned to Harlem to enjoy nightclubs, theaters, and metropolitan social life that Colgate did not afford.

During Colgate’s Bicentennial year, Art Force 5, a team of artists at Alfred University who promote equality, inspire creativity, build community, teach history, and sow empathy through community-based art, has created a mosaic portrait of Powell that will be installed in a public gallery in Harlem. A February 1 mosaic tile-painting event invited members of the Colgate community to take part in the project.

Although never quite an honor student by the numbers, Powell was an astute and thoughtful student who counted Colgate professors among his mentors. He was particularly close with Alfred E. “Doc” Alton, professor of Biblical literature and university chaplain, and with Eugene Bewkes, professor of philosophy.11 He had entered Colgate on the pre-medical track, but graduated with a degree in Biblical literature in 1930, and then returned to New York City.

His education in Biblical literature was practical preparation for the next step in his life: when Adam Clayton Powell Sr. retired as pastor of the Abyssinian Baptist Church in 1937, Adam Jr. took up the reins. Through both prayer and calls to action, Powell addressed socioeconomic inequality from the pulpit. He also organized picket lines and boycotts that led to greater opportunities for African Americans in Harlem.

With a natural charisma and personal magnetism well suited for a career in politics, Powell Jr. grew extremely popular with would-be constituents. He was also popular with Colgate students: in 1937, 1938, and 1940, he returned to Colgate to lecture on the problem of race in America. During his first return visit, Powell foreshadowed his political aspirations when he expressed concern over the fact that not a single black person sat in Congress and that more than 300,000 African Americans in Harlem were wholly unrepresented in local and national government because of gerrymandering.12 He ran for, and accepted, his first seat in public office in 1941, becoming the first African American elected to the New York City Council. When Harlem became its own political entity through New York City redistricting, Powell campaigned and won a seat in the U.S. House of Representatives by a wide margin — the first person to represent that neighborhood in Washington, D.C. 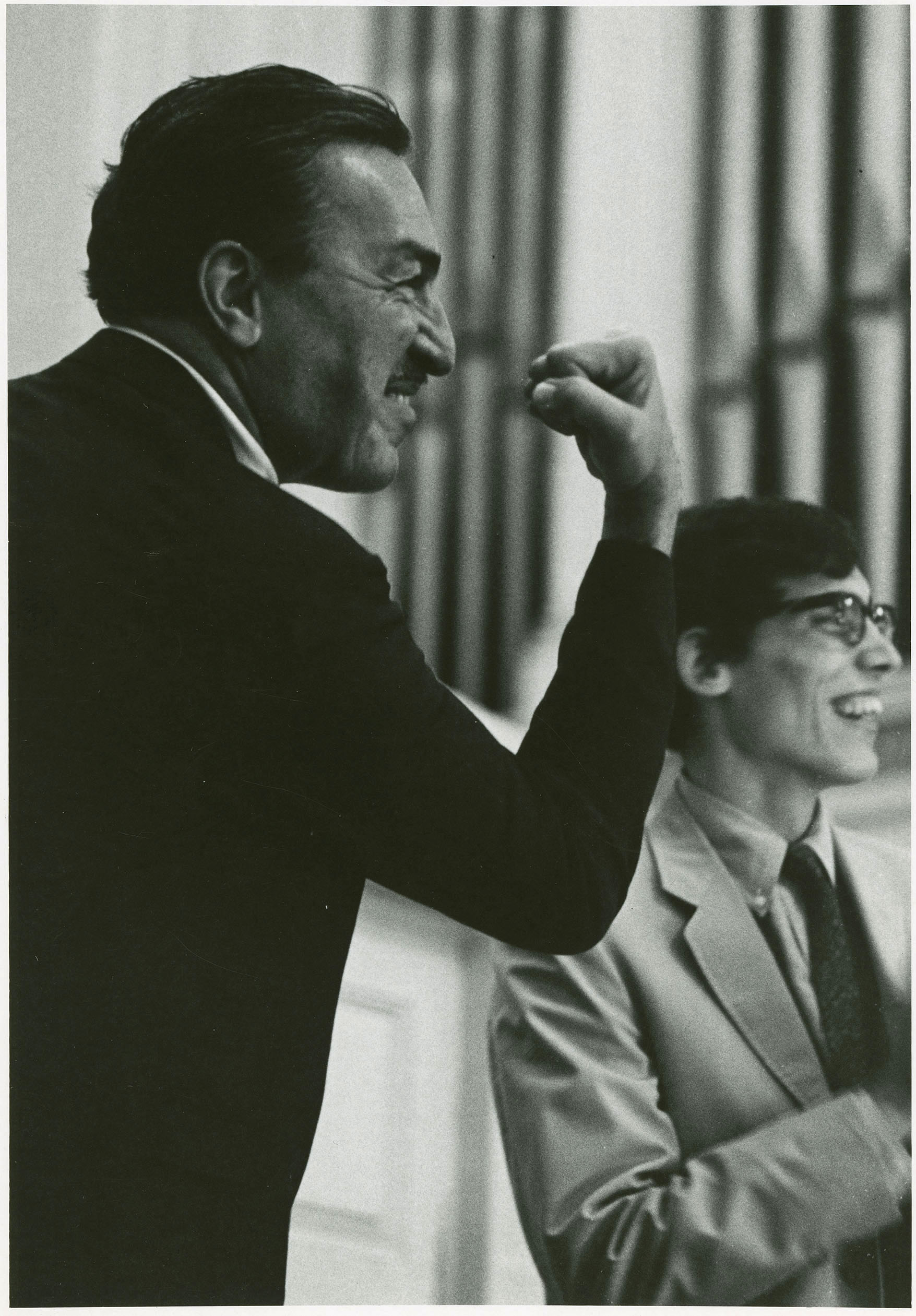 Powell flexes for the crowd in Memorial Chapel, 1968

Powell once called himself a “radical and a fighter.”13 These characteristics would be necessary for building the legislative and ideological foundation of the civil rights movement. Later in his career, he advanced to the powerful position of chairman of the House’s Education and Labor Committee, where he was instrumental in enacting programs for the poor and marginalized. Targeting poll taxes and Jim Crow laws, Powell also authored and co-authored bills that President Truman later included in his civil rights program. During this time, Powell once again returned to Colgate: in 1968, he delivered a rousing lecture on black power and the white establishment. He received a standing ovation from the overflow crowd in Memorial Chapel. 14

Powell’s political career was not without scandal. He was labeled “The Playboy Politician” for indulging his taste for travel, luxury, and women and was known to ruffle the feathers of his peers by challenging the racial status quo in Washington.15 He made enemies on both sides of the aisle. In 1968, he was accused of corruption and excluded from taking his seat in Congress. The Supreme Court reinstated him in 1969, but he lost re-election in 1970. Powell died two years later.

Despite the controversial ending to his political career, his legacy endures, and his contributions are honored today — nationally, in Harlem, and at Colgate. In uptown Manhattan, Seventh Avenue is also called Adam Clayton Powell Jr. Boulevard, and Harlem’s State Office bears his name. Adam Clayton Powell Jr. Paideia Academy serves to educate elementary school students in southern Chicago. At Colgate, the Adam Clayton Powell Jr. ’30 Award was established in 1993 to recognize seniors who have made outstanding contributions to Colgate, and in the process, have enriched the cultural and social lives of the student community of color. 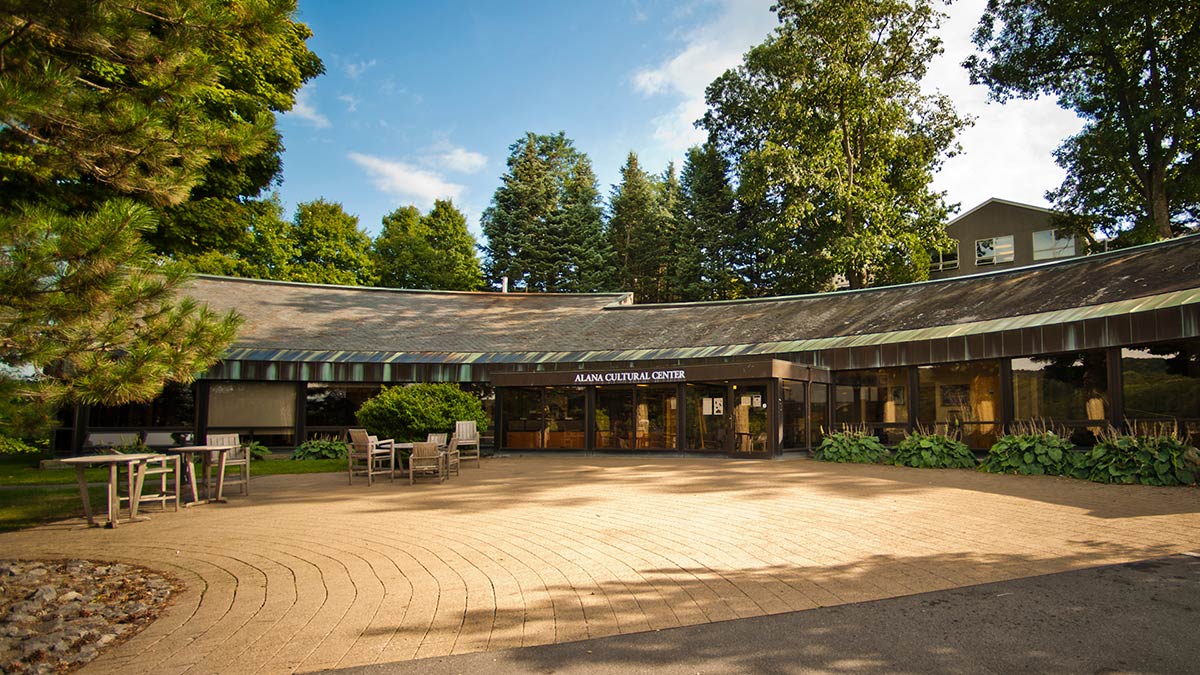 A multiracial and multicultural gathering space 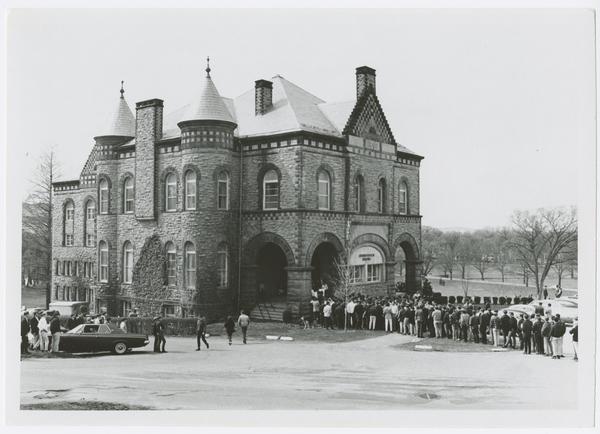