The story of how and when Colgate became co-educational hearkens back farther than one might think — and took some twists and turns along the way. 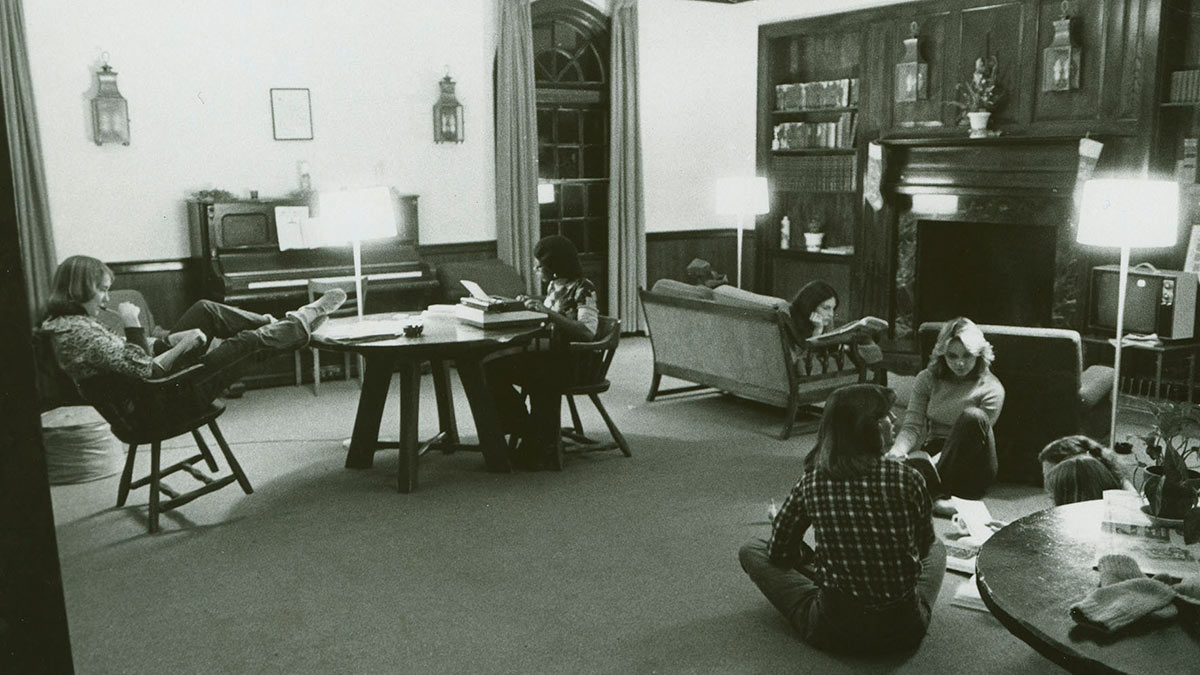 The inevitable lesson of this history, for institutions and individuals, is that holding onto tradition can be a good thing. But so is adapting and disrupting that tradition when the world changes.” 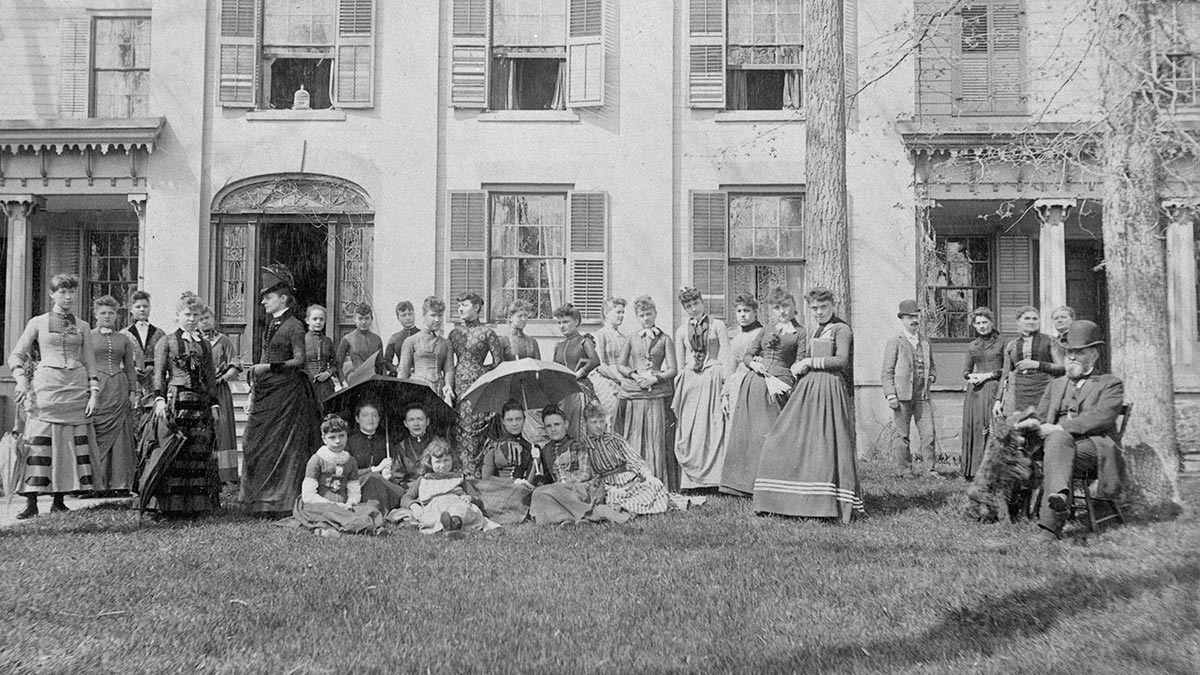 At first glance, the question “When did Colgate become coed?” suggests an easy answer: the first women students arrived in 1970 as members of the Class of 1974. Yet beneath that simple arithmetic lies a more complicated — and infinitely more interesting — story.

Colgate’s earliest female student was likely Emily Taylor, daughter of university president Stephen W. Taylor (1851–56), who sat in on her father’s classes in moral philosophy.1 Yet while we believe that Miss Taylor sat in on a few classes, Colgate’s first bona fide, full-time female student was a precocious 14-year-old named Mabel Dart (later Colegrove), daughter of the man who managed the university boarding hall, from 1878 to 1882.

James A. Smith, Class of 1970, historian, and author of Becoming Colgate (forthcoming 2019), believes that both President Ebenezer Dodge and James B. Colgate favored admitting women to the university. Smith also suggests that the nearby Hamilton Female Seminary on Broad Street had begun to resemble a coordinate college by the time of its closing in 1889 and might well have become an actual coordinate campus — along the lines of Barnard or Radcliffe — had it survived. 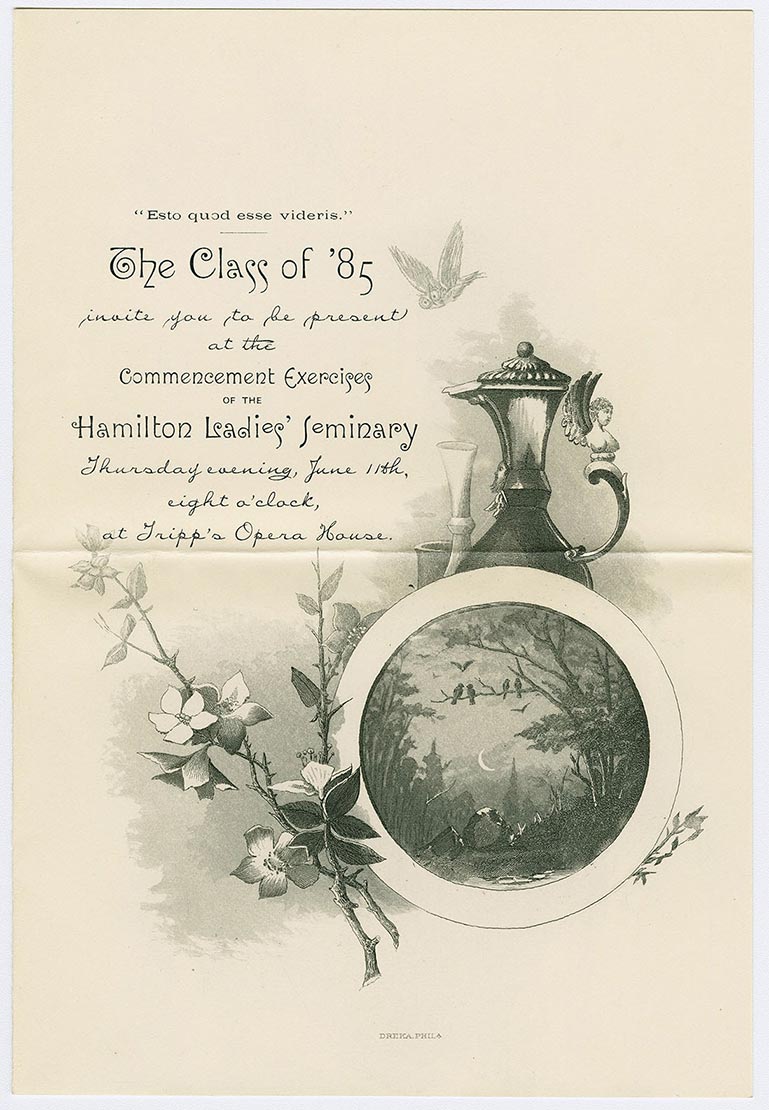 These suppositions require piecing together a historical jigsaw puzzle from fragmented evidence. What we do know: the university’s Board of Trustees went on record in 1881 on “the matter of ladies attending recitations of college classes.”2 In a not-especially warm welcome, the board resolved: “while we do not hold out any encouragement for women to connect themselves with the University yet we will allow them to enjoy the privileges of the class room on payment of the tuition fees without recognizing them in any way as members of the University.”3 This mixed message may have reflected a board that was more wary than President Dodge and James B. Colgate about the prospect of admitting women.

Up to the mid-20th century, periodic influxes of female students followed the Board of Trustees’ dictum: they took classes, often paying full tuition, yet did not receive Colgate degrees. Did their presence suggest a coeducational school, broadly defined? Punsters writing for the Colgate Maroon in 1928 claimed as much: “There are women on the campus. There are women registered in our classes. There are women knocking on the very gates of Colgate[,] and some have even penetrated into the innermost recesses and secrets of our university life. No longer may we boast of the masculine supremacy. The college is co-ed.”

This tongue-in-cheek observation referred to young faculty wives who were taking classes alongside the male students. Yet the anonymously authored article underscores how often — and early — “the masculine supremacy” was more theory than fact at Colgate.

There are women on the campus. There are women registered in our classes. There are women knocking on the very gates of Colgate and some have even penetrated into the innermost recesses and secrets of our university life. No longer may we boast of the masculine supremacy. The college is co-ed.” 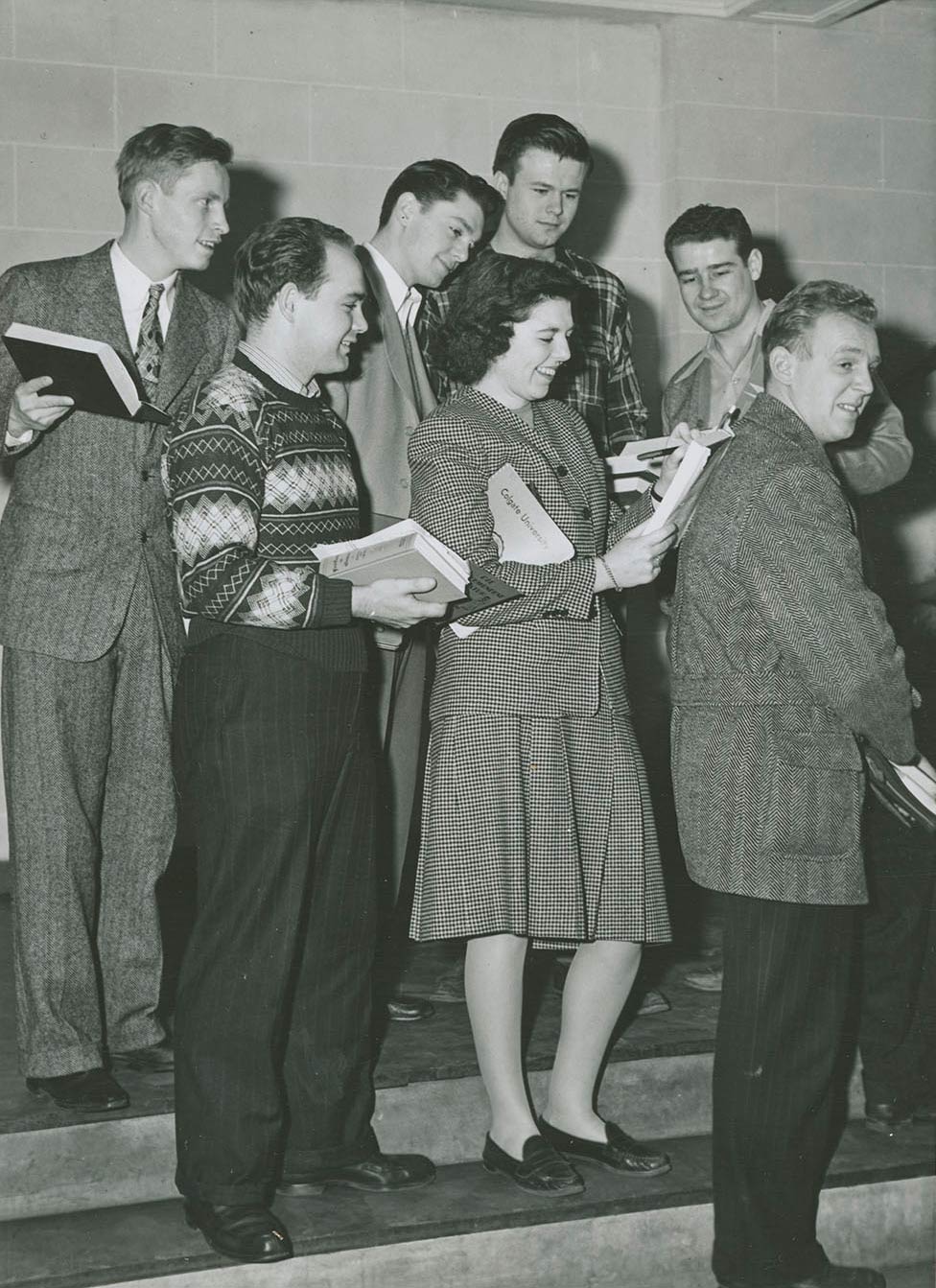 It was not until shortly after World War II that Colgate first publicly welcomed — and trumpeted — female students’ presence on campus, when several wives of enrolled veterans took classes at the university. University media reports fell back on gender conventions of the time and made much of the novelty of women on campus. For example, university historian Howard D. Williams, Class of 1930, noted that all of the coeds except one were brunette and dressed in “sweaters, skirts, anklets and loafers” while on campus.5 Yet these women were not simply “trailing spouses”; several were veterans in their own right, including Helen Craven Mues (pictured) a former WAVE who had served two years in the United States Navy.

While the military spouses were constrained by trustees’ 19th-century decree banning women from taking degrees, in 1961, women finally broke through this barrier when the university awarded master’s in teaching degrees to three secondary-school teachers: Frances Haynes Sprague, Gertrude E. Shillabeer, and Emily Bennett Spinelli. The 1960s also saw women on campus — primarily during January term but also in some regular semesters — as part of exchange programs between Colgate and nearby women’s colleges, including Vassar and Skidmore. As the 1960s progressed, female faces in the classroom would become even more familiar.

In the late 1960s, the Committee to Study Coeducation surveyed current students about their attitudes towards coeducation; identified benefits that women might bring to the university; and ultimately proposed a type of “coeducation” that might look unfamiliar to today’s students.

The committee’s questionnaires showed moderate levels of support for coeducation among current students, with 52 percent supportive of the establishment of a sister institution. Only 15 percent of current students, however, responded in support of full coeducation. In some cases, the survey revealed interesting demographic trends related to the issue. For example, students with a higher grade point average were more likely to oppose coeducation than students with lower GPAs. And 70 percent of unaffiliated upperclassmen were in favor, while only 56 percent of fraternity members were.6

The move to full coeducation

The committee itself was unanimous in emphasizing the positive effects that women could have on the institution, noting, “In the case of an all-male school, the fine arts, languages and education, suffer for lack of upper division students.”7 The report also predicted that women would be “conscientious workers, more committed to a liberal education, less susceptible to the pressure for vocationalism and more intellectually mature than males of equal age.”8 Combined with the university’s physical isolation and competition from more affordable (and coed) public universities, as well as a desire for a more “natural” social environment, the committee recommended coeducation as in the best interest of the school and its longevity.9

Instead of a fully integrated institution, as we enjoy today, the report proposed a coordinate college, along the lines of Barnard or Radcliffe. They expressed this preference as the least disruptive to Colgate’s “congenial environment” while still garnering the advantages of coeducation in the classroom and improved male-female social opportunities — but a coordinate college became the road not taken.10 The university eventually moved toward full coeducation with a target date of September 1970 for the entering Class of 1974, although a few upper-division transfer students were admitted in the late 1960s, some to accommodate the marriages of current students.11

While one could argue that Colgate had embraced elements of coeducation since the early 19th century, the official date for a fully coeducational school dawned with much fanfare and excitement. In September 1970, 214 women (132 of them “freshmen”; the rest transfer students) joined 452 men as the Class of 1974.12 As the Colgate Maroon noted, “Girls Shatter ‘Male Tradition’ as Campus Enters a New Era.”13 The university had placed ironing boards in the dorm rooms and did its best to disguise the urinals with plastic pots of flowers; the athletics department had ordered hairdryers, while the campus store added false eyelashes and fashionable bags to its stock.14

In 1970, East Andrews Hall became the only all-women freshman residence on campus, housing 62 first-year women. That same year, “Griff’s House,” the former residence of the former dean of students, William F. Griffith, was transformed into a women’s-only living unit (sometimes referred to as a “co-op”), providing housing for 15 upper-class transfer students.15 Other dormitories on campus housed both men and women students.16 Housing options changed frequently in the following years as the university explored how to meet all students' needs. In 1976, prompted by student demand, 84 Broad Street (previously the Sigma Nu fraternity) was repurposed as Bolton House: a women's resource center with women's-interest housing and the ambition of serving as a "unifying force among past, present, and future Colgate women." 17  Today, 84 Broad Street is the residence of the Delta Delta Delta sorority. A permanent Center for Women's Studies opened in the renovated basement of East Hall in 1994.

A member of that first class, Gloria Borger, gave an address at the Anniversary Convocation of Women at Colgate in 1990. Of those early years of coeducation, she remembered “a male-dominated and male-oriented institution that had not fully prepared for the changes women would bring… We were seeking equality of treatment,” she explained, “and we got full-length mirrors and ironing boards.”18

When the university seemed slow to change, the women often took change upon themselves. They formed the Colgate-Hamilton Women’s Caucus, a group of about 60 students and faculty women who held weekly meetings “provoking action” on topics such as more suitable athletics facilities for women, removing fixed admissions quotas, affirmative action hiring, and improved medical services, including access to birth control.19 Perhaps revealing of the highly sensitive nature of the meetings and of the perception of women on campus, a female student told the Colgate Maroon in 1974: “You don’t have to be a feminist to come to the meetings. Lots of people come because they want women to back them up and we are willing to give them the support they need.”20

The evolution of academic and campus culture

Bringing women into Colgate as undergraduates necessarily changed more than just the student body. A coeducational university also brought about transformations in the faculty and in the curriculum. Smith notes that “when the decision to move forward with coeducation was made, only five women were teaching at Colgate; four were instructors and one a part-time assistant professor.”21 (Notably, three of these women were wives of faculty members.) 1974 was declared the “Year of the Woman,” as Colgate committed to hiring more women as tenure-stream faculty. However, their numbers grew slowly: by the end of the 1970s, only 27 of the 178 full-time faculty were women.

During the early years of coeducation, faculty members and administrators also began discussing possible changes to the curriculum based upon the wants and needs of female students. In the illuminating “Report of the Committee to Study the Future of Coeducation at Colgate,” published in October 1973, the committee recommended that professors “be reminded to check their courses to make sure they do not reflect discrimination on the basis of masculine interests only, or neglect the contributions of women.”22 The 1980s at Colgate brought an increase in courses about women and gender as feminist theory and activism moved from its second to its third wave. In 1989, a major in women’s studies was approved, with the stated ambition to “study history and culture from women’s perspectives and to deepen methods of academic pursuit by acknowledging the critical importance of gender.”23

According to the most recent available data from the 2017/2018 academic year, 42 percent of full-time faculty are women and 55 percent of the student body identify as women. (This “tipping of the scales” to a majority of women students has been a fairly regular trend since fall 1992.)

In 2014, Gloria Borger gave an encore address — as the featured commencement speaker — in which she offered an erudite conclusion regarding her experience as one of Colgate’s first female graduates: “The inevitable lesson of this history, for institutions and individuals, is that holding onto tradition can be a good thing. But so is adapting and disrupting that tradition when the world changes.”24 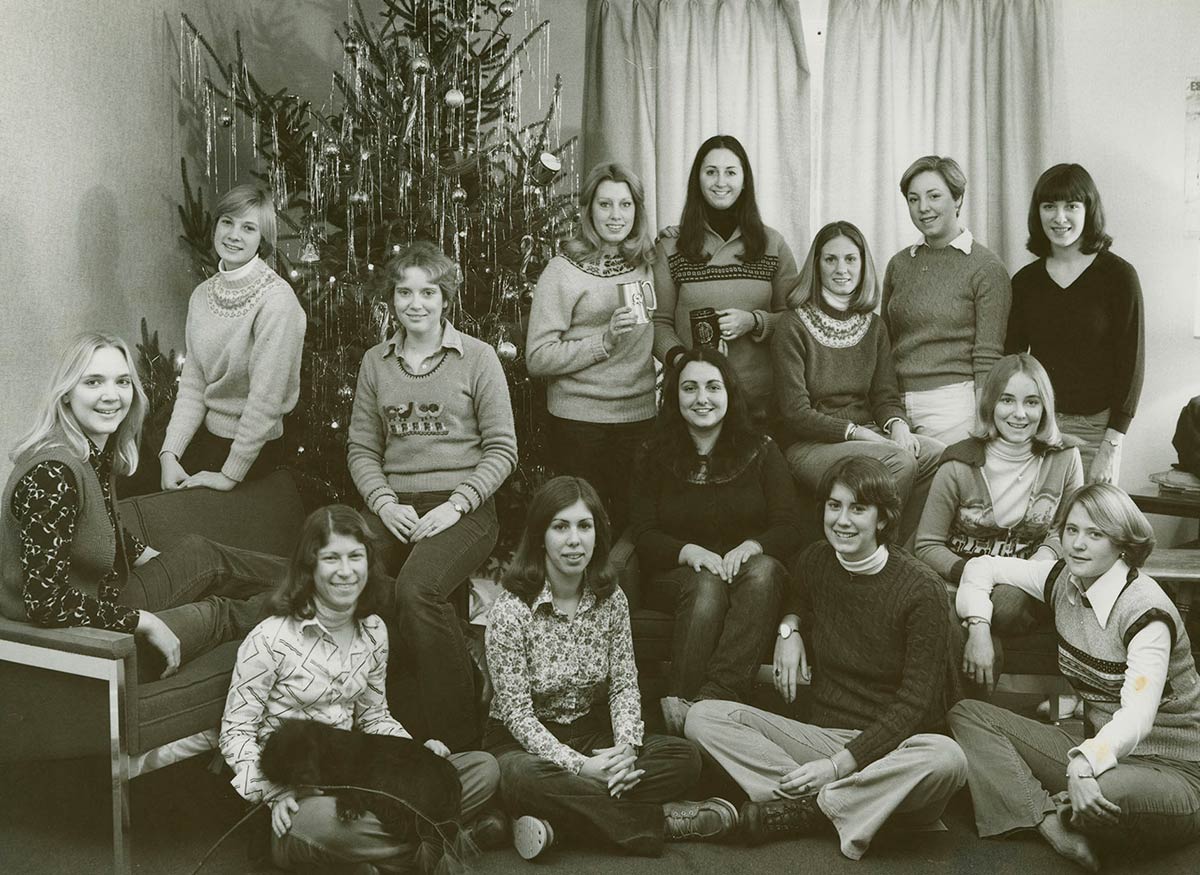 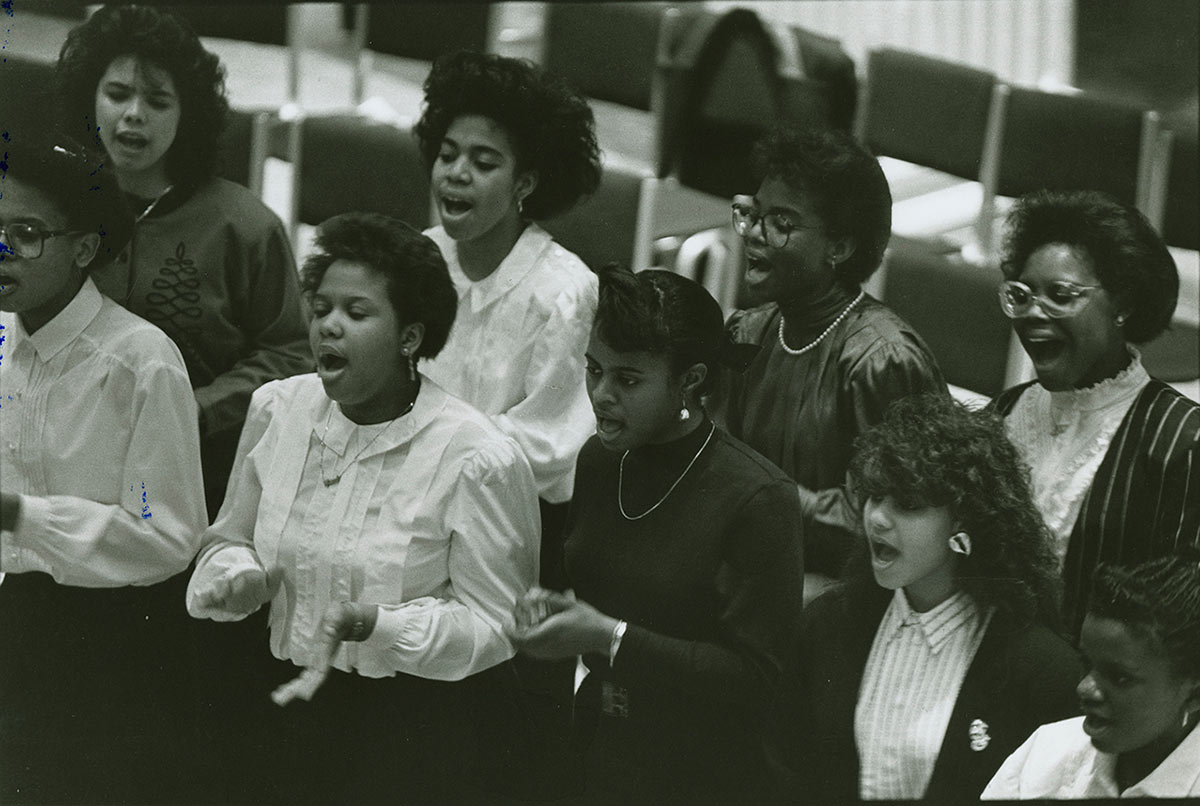 "The Sojourners" sing in a performance, circa 1980s 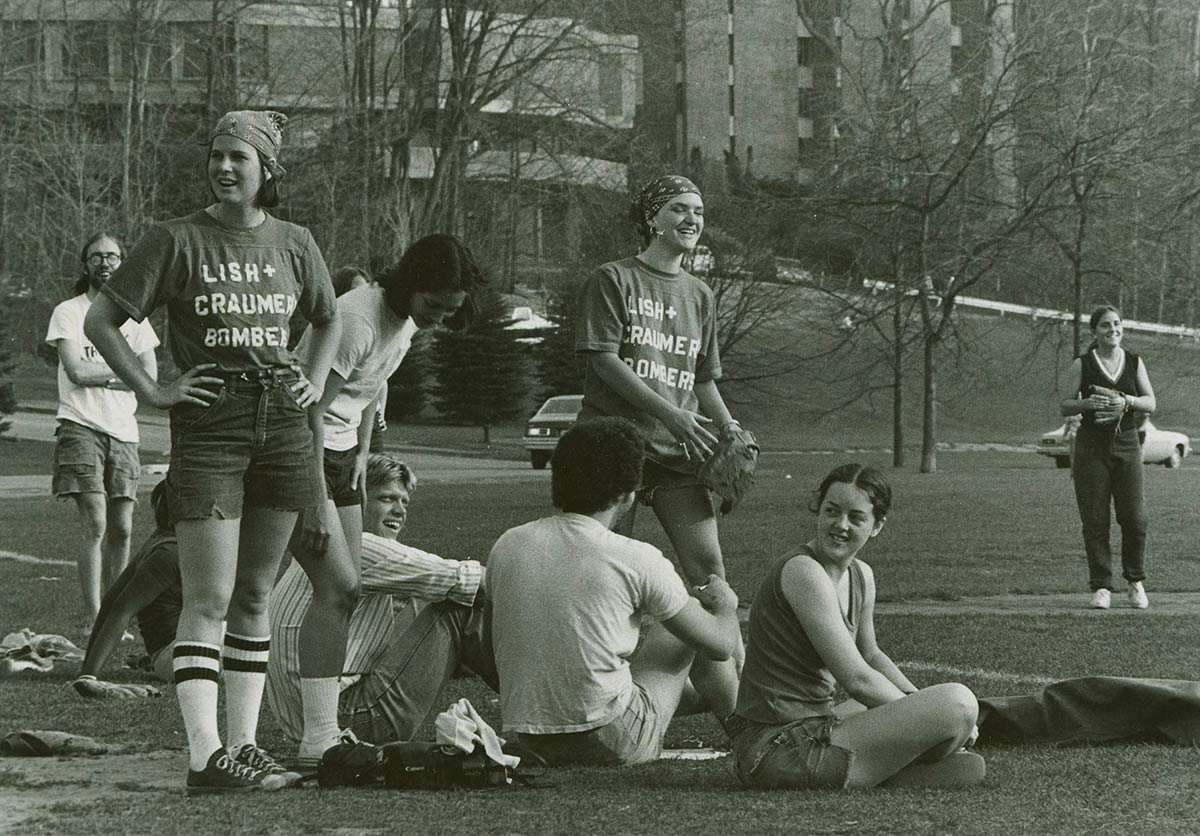 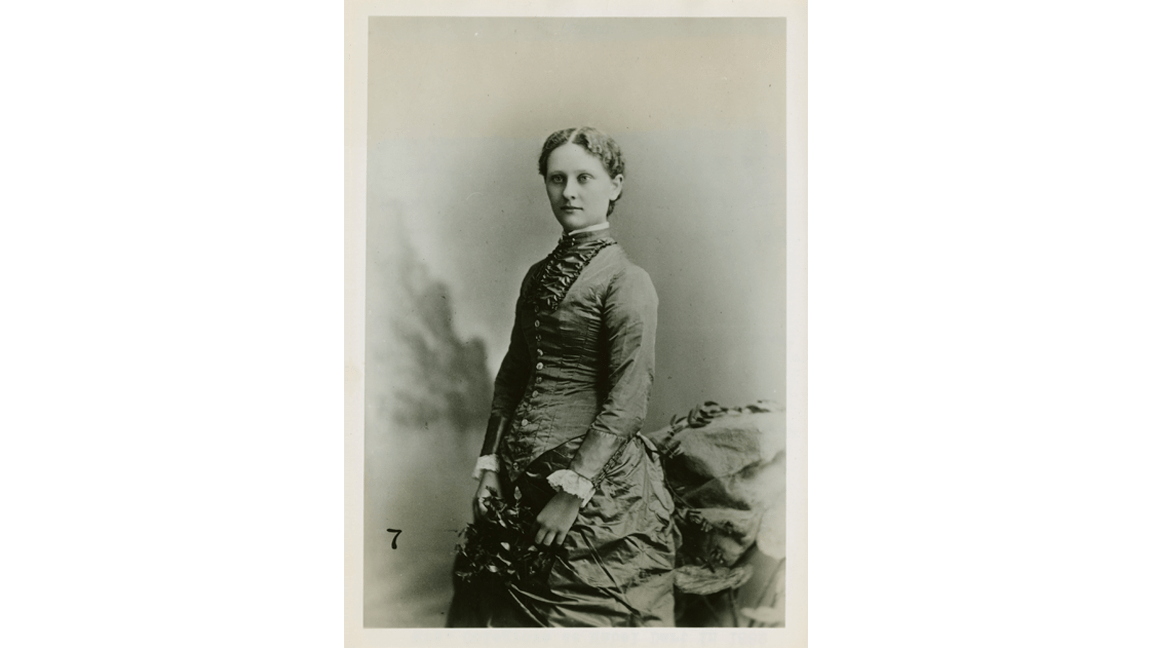 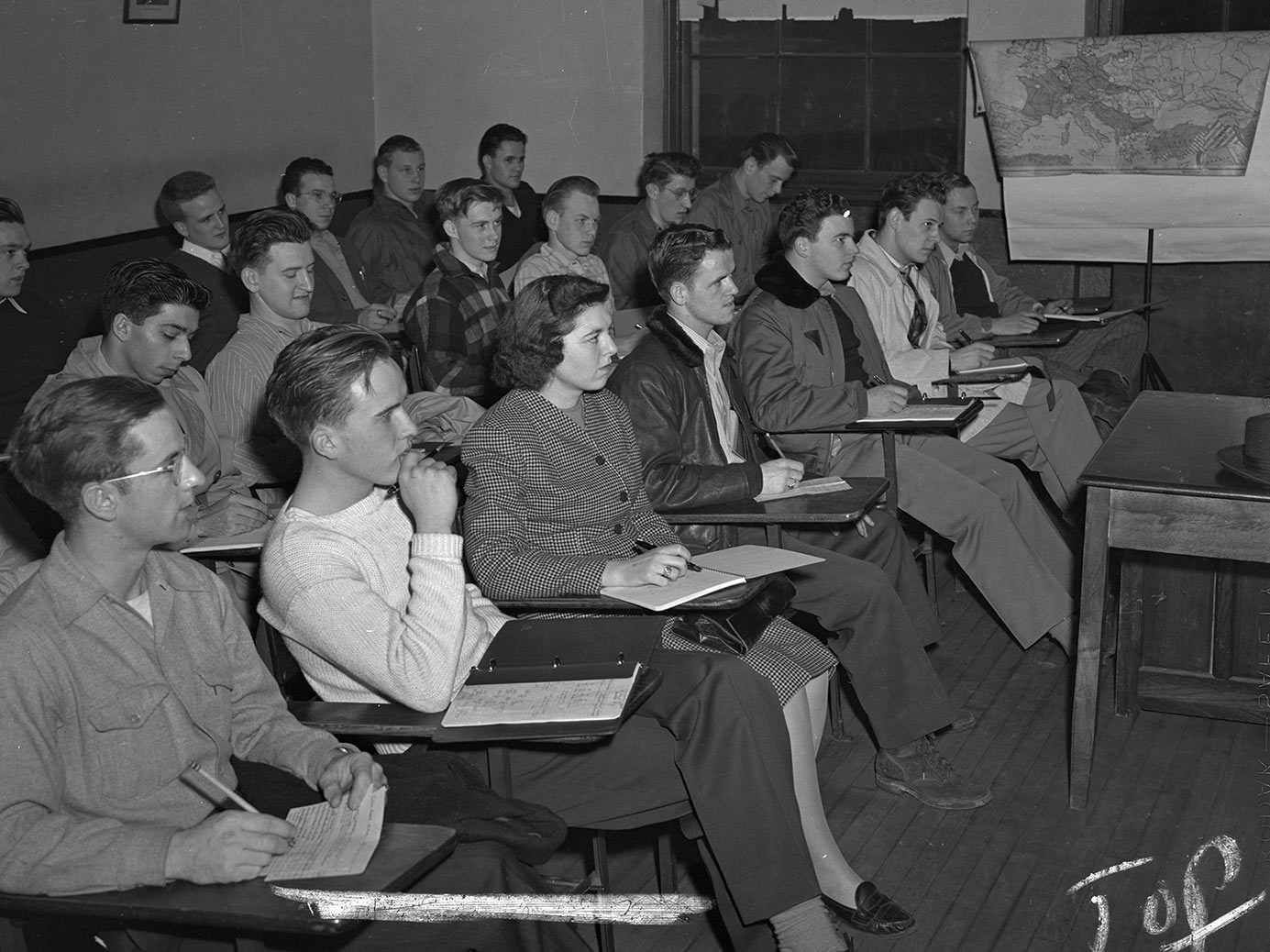 First of the G.I. Wives