By Imani Ballard ’18 and Emily Jeffres

Hascall Hall was once the hub of scientific exploration on campus. Named for Daniel Hascall, one of Colgate’s founders and first teachers, the 1884 building has now become the home of the philosophy department and sits on the National Register of Historic Places. 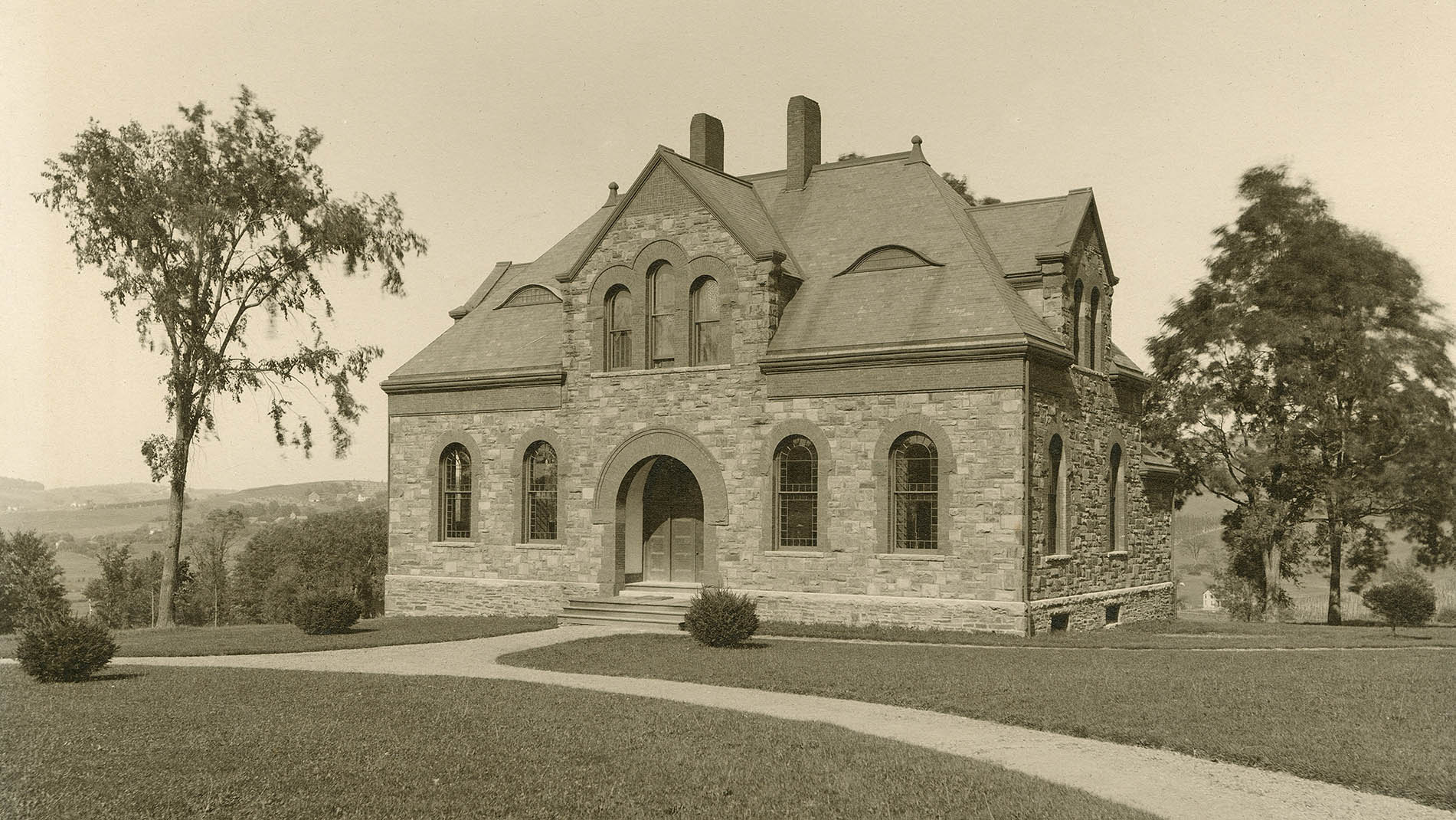 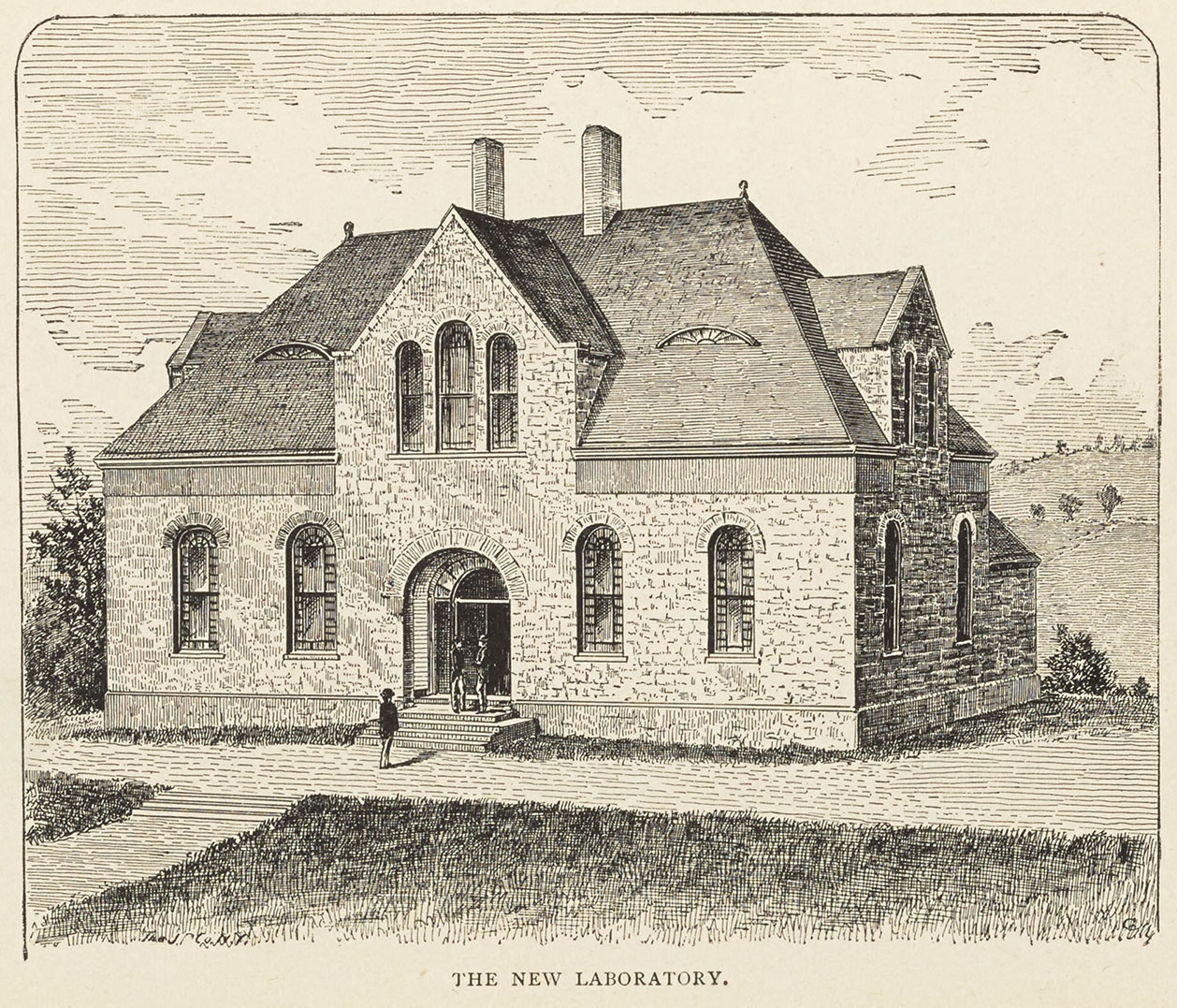 Colgate’s historic buildings exist in harmony with the lush forests of the surrounding hills. From academic structures such as McGregory and Alumni Hall to the activity-centered James C. Colgate Student Union, each has been designed to meet the needs of students across eras.

The Chemistry Laboratory, now known as Hascall Hall, was originally constructed in 1884 after President Ebenezer Dodge combined his personal investment with financial gifts from Samuel Colgate and other donors to create the university’s first dedicated classroom building.1  This building, devoted to scientific study, marked a moment of change for the university as it expanded its theological and classically-focused curriculum.

One-and-half stories high, the structure was said to be in the Richardsonian Romanesque-style and, like other early university buildings, it was built with local stone from the quarry above the hill. The new laboratory housed lecture halls of the physical sciences, chemistry, and astronomy departments, and was fitted with all of the trappings of turn-of-the-century scientific research, such as a pneumatic trough, a draft chamber for sulphuretted hydrogen, a “75-light Springfield gas machine,” and a large cistern in the cellar, fed by a spring near West Hall, which provided fresh water for experiments. 3, 4 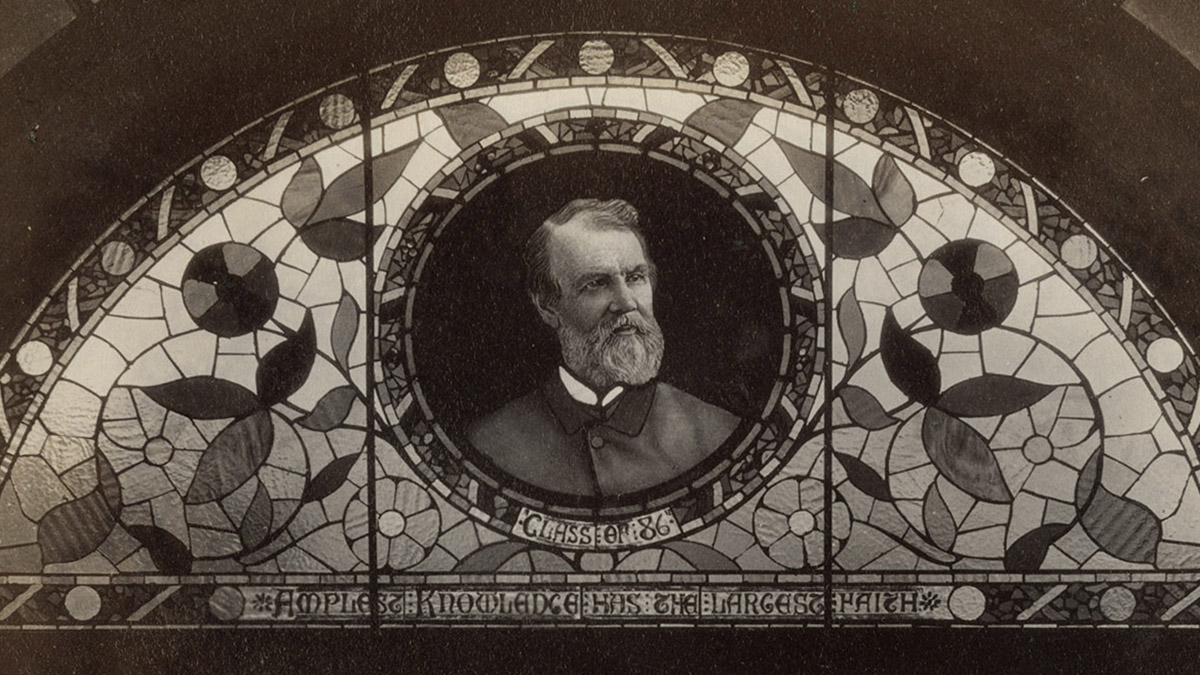 To honor President Dodge, the Class of 1886 (the first class to use the building) placed an elaborate stained glass memorial window over the west entrance to the building, complete with a rendering of Dodge’s likeness and the inscription: “Amplest knowledge has the largest faith.”5 Almost a decade after its construction, students continued to express their thanks of President Dodge:

“Our late President, the beloved Dr. Dodge, was a remarkably gifted man, one whose thought was usually in advance of the age in which he lived. He saw the trend of the times and the necessity of increased scientific study if we would compete with other colleges. It is to Dr. Dodge that the Chemical Laboratory owes its existence.” 6

“Our late President, the beloved Dr. Dodge, was a remarkably gifted man, one whose thought was usually in advance of the age in which he lived. He saw the trend of the times and the necessity of increased scientific study if we would compete with other colleges. It is to Dr. Dodge that the Chemical Laboratory owes its existence.”

A tender tribute to a student of chemistry

While the stained glass memorial to President Dodge was removed in 1971,7 another memorial still stands inside the building: a plaque in honor of student Albert Edwin Lockhart, Class of 1891.

A talented chemistry student, Lockhart had been furthering his scientific studies in Germany, when he boarded the S. S. Elbe en route home to New York on January 30, 1895. Tragically, the Elbe collided with another vessel and sank in the Atlantic and Lockhart died at sea — along with 374 other passengers — just four years after his graduation.8 In hearing the news, his classmates were stirred to create a memorial in honor of his “gentleness, amiability, and charity” and his love of chemistry.9

Additions to the building

After the university matched Andrew Carnegie’s $20,000 donation for the “enlargement and improvement of the Chemical Laboratory” in 1906, the university added the Carnegie wing extension on the east side of the hall.10 The new building now featured laboratories for quantitative and qualitative analysis, a large lecture room, and a mineralogy room.11

With the relocation of the chemistry department to McGregory Hall in 1930, the building then housed the biology department until 1971 and the fine arts department from 1971 to 1974.12  By this time, the structure was in disrepair and the administration considered razing the building because of its condition — and to make way for the construction of Olin Hall. After opposition from both faculty and students and a campaign to “Save Old Bio” (as the building had come to be known), the New York State Historical Trust placed it on the National Register of Historic Places in 1973, making it eligible for renovation through federal funds.13, 14 Renovations designed by architecture firm Rogers, Butler, and Burgun in 1976 called for the removal of the 1906 expansion.15 The restored building was then renamed after Daniel Hascall, one of Colgate’s 13 founders and first teachers, and it became the headquarters of the philosophy and religion department in 1978.

Serendipitously for this building devoted to the study of the sciences, an ancient natural history is captured within its stone walls: those with a careful eye will spot fossils — primarily brachiopods — embedded in the front and west exterior elevations of the building.  These clam-like animals lived in the area approximately 400-million years ago, when shallow seas covered New York state.2 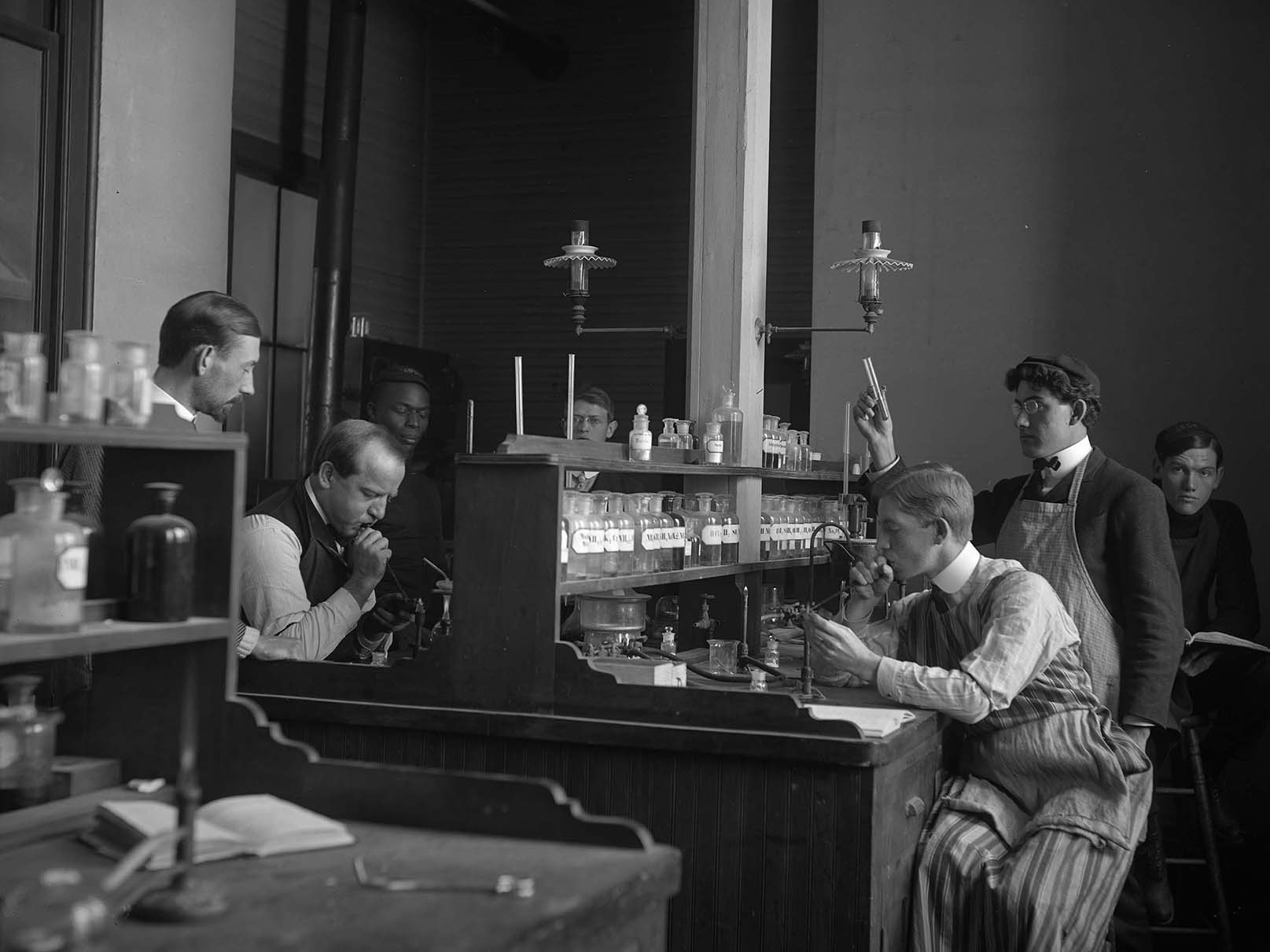 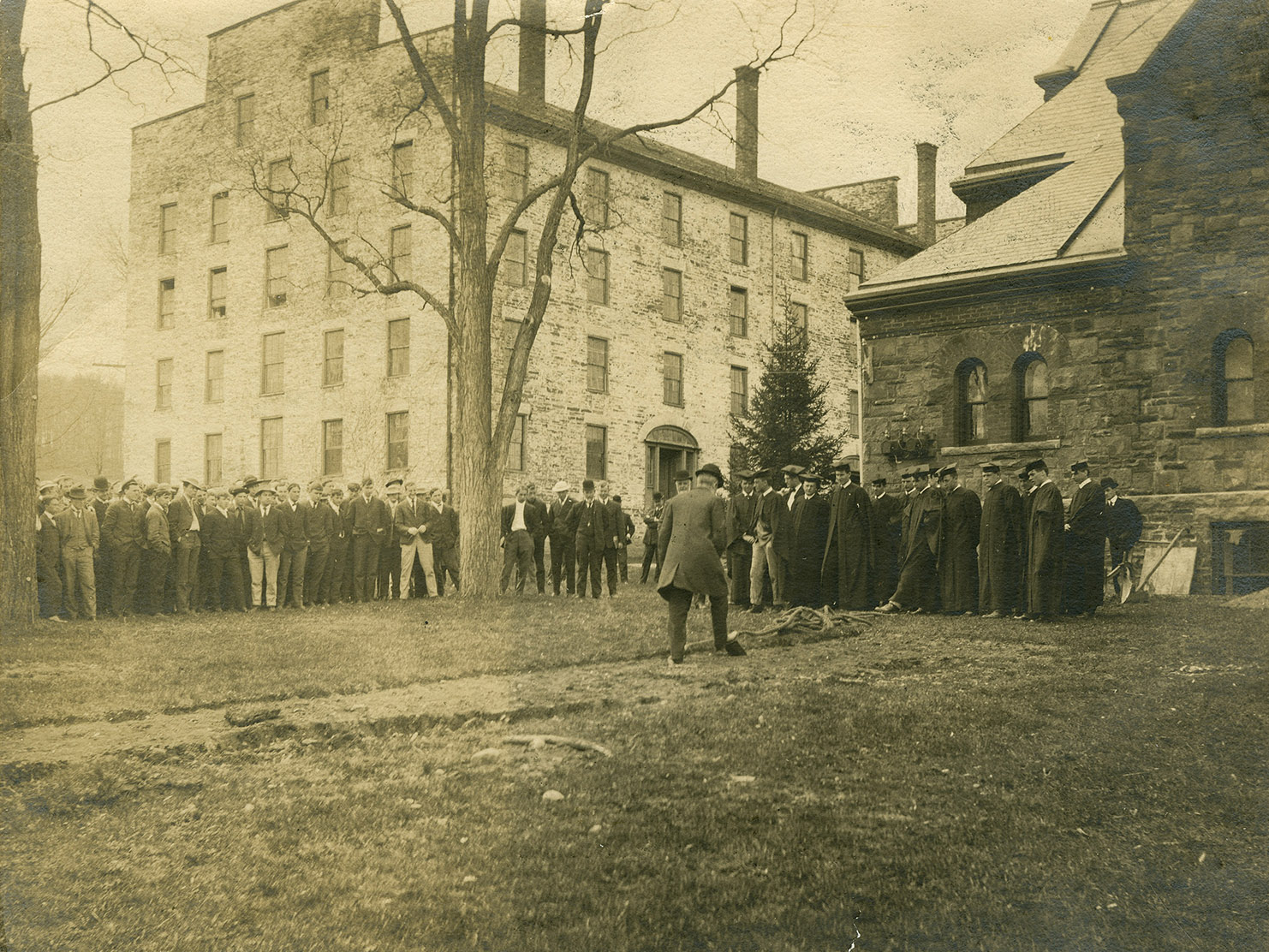 Fossils in the stone walls of Hascall Hall, 2018 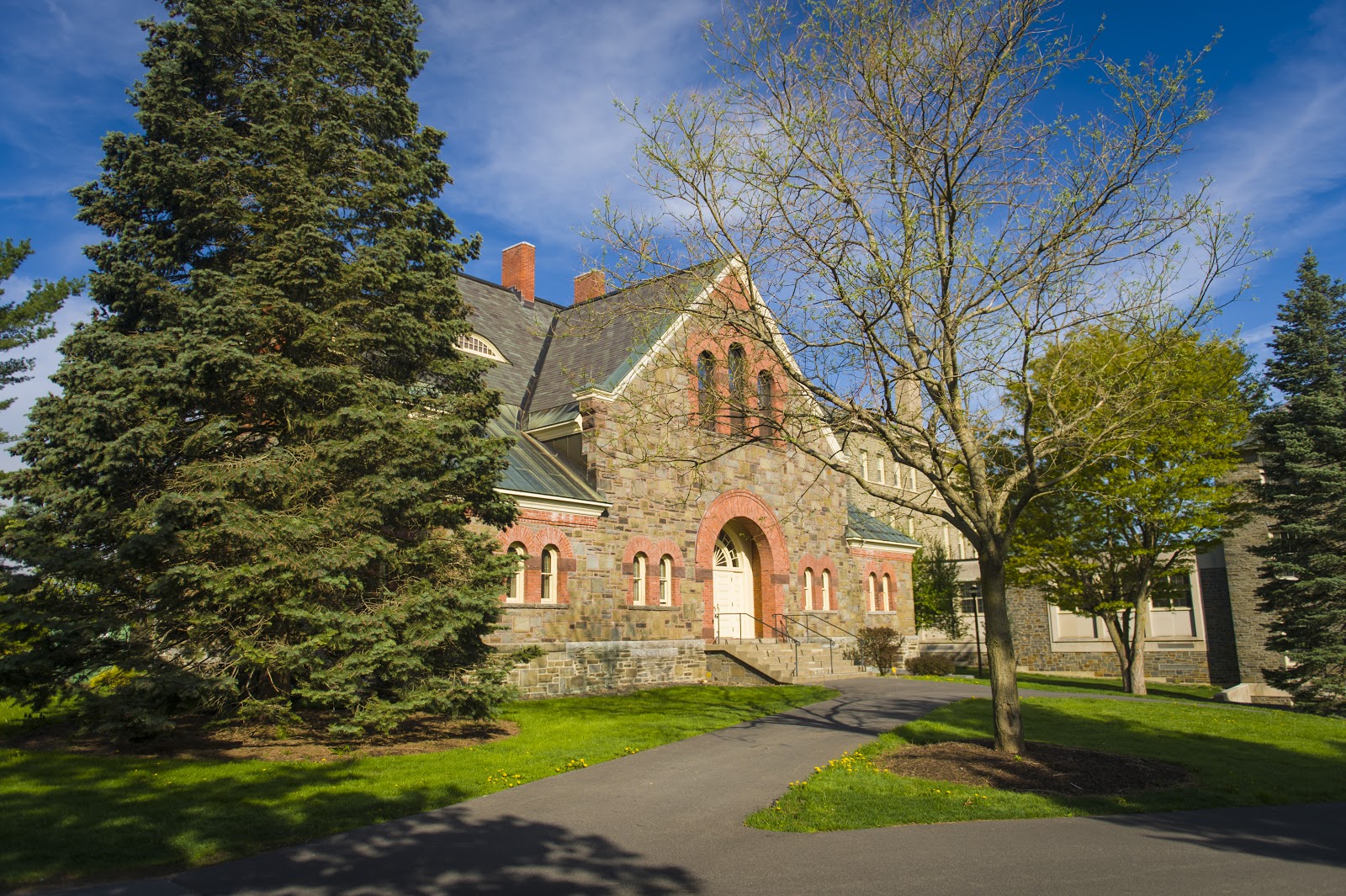